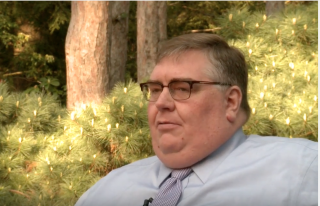 A lawyer and judicial candidate in Michigan has been facing backlash after an email that he sent out comparing a sitting black judge to a ‘800-lb Silverback Alpha Male’ gorilla.

The lawyer, Eric Grimm, is currently in the middle of a campaign to be a judge in Muskegon County, Michigan. In an effort to raise funds, he sent out an email to friends, supporters and colleagues. In the email, he criticized sitting judge Gregory C. Pittman.

“I can understand why some of the other candidates may not want to speak up about the 800-lb Silverback Alpha Male in the middle of the Probate Court. They are each considerably less free to walk away and refuse to have anything to do with this court if the bullying problem is not fixed,” Grimm wrote according to MLive.

Grimm has since apologized for comments, but still faces intense criticism from public figures in the county and its residents.

“I pleaded guilty to ‘insensitivity.’ I accepted personal responsibility for a momentary lapse of judgment – to a mistake that led to saying something insensitive. I apologized promptly. I took responsibility for and ownership of what I did wrong. And, as I said at the television interview, in a display of contrition, I am sentencing myself to 100 hours of community service, in the very same community most adversely impacted by my mistake,” wrote Grimm in a statement.

While Grimm feels remorse for his actions, he also believes that the outrage against him has been unwarranted.

“I got carried away with the artfulness of a triple metaphor, and lost sight of the optics. It was clumsy and I regret it. The ensuing so-called ‘outrage’ is overblown, insensitive in itself, and a charade,” Grimm said.

While Grimm believes that the outrage is overblown, others in the county disagree such as Pittman himself and the county bar association.

“The dignity and ethical considerations incumbent upon me as Presiding Judge of the Family Division of the 14th Circuit Court dictate that I must decline to respond to the trite and bigoted remarks and imagery evinced by the recent statements of Eric Grimm. It is left to each of us in this community to draw our own conclusions about Eric Grimm, his mind-set and its place in our community,” wrote Pittman in a statement.

The Muskegon County Bar Association echoed his sentiments in a statement to the local newspaper “it does not condone racially-motivated or bigoted comments from any member, attorney, or person.”

Grimm faces a tough election and campaign ahead of him following these statements. In addition, he received a rating of one out of five stars from a panel to determine which candidates running would be good judges. He was also rated as the candidate least fit to be a judge.

However, Grimm apparently does not care about his rating.