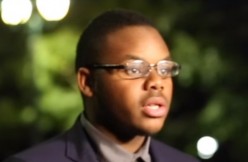 Remember that Florida teen who was arrested for pretending to be a doctor? He was offered a plea deal in a Palm Beach County court on Wednesday.

Prosecutors offered 19-year-old Malachi Love-Robinson—who went by the name “Doctor Love”—three years in prison plus probation, WPTV reports. A court hearing scheduled for June will see if he takes the deal, or keep fighting charges in a prospective July trial.

He denied wrongdoing after the story broke in February, even storming out of an interview with Good Morning America. Police say he practiced medicine without a license while running his New Birth, New Life Alternative Medicine and Urgent Care Clinic. Authorities are also pinning him for allegedly forging an 86-year-old patient’s checks.

Love-Robinson faced similar accusations before. The Florida Department of Health issued him a cease-and-desist order in October after he allegedly practiced massage therapy without a license. He also allegedly pretended to be a doctor at St. Mary’s Medical Center in January 2015, but was reportedly busted when he walked into a pregnant woman’s exam room. He told WPBF he was just shadowing the physicians.