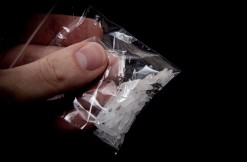 The owner of an auto body shop in Minnesota allegedly rewarded employees with methamphetamine as a bonus.

The Minnesota River Valley Drug Task Force, a multi-jurisdictional unit operated by many local sheriff’s offices and police departments, raided Clear Choice Auto Body Repair on Wednesday after an employee notified authorities, according to a Fox 9 report. That night, employees allegedly got one-half gram of meth during a staff meeting. Authorities say owner Jesse Michael Seifer, 40, and his girlfriend Nancy Jean Loehlein, 39, seem to be responsible.

Investigators claim they discovered syringes and a digital scale on the site. These allegedly tested positive for meth residue. The investigation is ongoing, and charges are pending.