Student Says He Was Kicked Off Flight, Questioned by FBI Just for Speaking Arabic | Law & Crime

Student Says He Was Kicked Off Flight, Questioned by FBI Just for Speaking Arabic 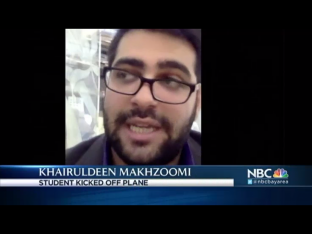 A 26-year-old student at the University of California, Berkeley says he was kicked off a Southwest flight earlier this month for speaking in Arabic while the plane was boarding. He recounted the events in a lengthy interview with the Washington Post that was published on Monday.

The student, Khairuldeen Makhzoomi, told the Post that over the course of 24 hours he went from asking questions of United Nations Secretary General Ban Ki-moon at a World Affairs Council dinner-discussion in Los Angeles to getting questioned by the FBI in a small airport interrogation room.

Makhzoomi says that while waiting for the other passengers to board the plane he called his uncle, who lives in Baghdad, to discuss the events from the night before and to tell him about getting to speak with the the U.N. Secretary General at the World Affairs Council dinner.  During the conversation, which was in Arabic, Makhzoomi says he noticed the female passenger seated in front of him started to give him a strange look so he wrapped up the conversation.  Makhzoomi says he believes the woman went to alert the flight attendants because they were soon at his seat asking him to please exit the aircraft.

Why would you speak in Arabic on the airplane? It’s dangerous. You know the environment around the airport. You understand what’s going on in this country.

Makhzoomi says he quickly grew frustrated with the employee’s tone, which he described as accusatory, and he admits that he accused the employee of engaging in islamophobia.

“This is what Islamophobia has done,” Makhzoomi says he said to the employee in a moment of exasperation.

Probably not the smartest move as it only seems to have escalated an already tense situation.

In fact, Makhzoomi said this angered both the employees and the police officers at the gate, who he says then radioed for the FBI to respond to the scene.  He says he was then handcuffed and taken to a small interrogation room where FBI questioned him about his families ties to Iraq and martyrdom.

Makhzoomi says he eventually released by the FBI agents, who he says told him that he could not fly on Southwest again.

The Council on American-Islamic Relations (CAIR) issued a statement about the incident, as well as similar incidents that it alleges have occurred in recent months, through spokesman Ahmed Rehab saying, “We are tired of Muslim-looking passengers being removed from flights for the flimsiest reasons, under a cryptic claim of ‘security.'”

Southwest Airlines reportedly refused to comment on the specific incident, citing customer privacy concerns, however, they did release a statement to the Post that reads, in part:

[The] Crew made the decision to investigate a passenger report of potentially threatening comments overheard onboard our aircraft. … While local law enforcement followed up with that passenger in our gate area, the flight departed.”

We regret any less than positive experience a Customer has on Southwest. Safety is our primary focus, and our Employees are trained to make decisions to safeguard the security of our Crews and Customers on every flight. We would not remove a passenger from a flight without a collaborative decision rooted in established procedures.

Southwest neither condones nor tolerates discrimination of any kind.

“We were asked to respond, and we determined no further action was necessary, said Ari Dekofsky, a Los Angeles FBI field office spokesman, when asked about the incident by the San Francisco Chronicle.

Makhzoomi, however, is not backing off his claim and believes he was discriminated against based on his religion.

“Islamophobia does not serve to fight terror. It plays right into the Islamic State game of striking fear among us.”

The Post reports that multiple lawyers have contacted Makhzoomi with offers take his case should he want to pursue a legal claim against the airline, but for now he says he only wants an apology.  Makhzoomi claims to have reached out to the airline on multiple occasions since the April 6th incident but says he has not received anything beyond a cursory reply.

Southwest reportedly denied Makhzoomi’s claim that he has reached out to resolve his complaints, saying they have no “record of the Customer contacting us and have tried multiple times to reach him after learning of his disappointment.”