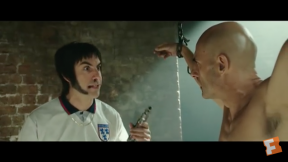 A grisly and controversial scene in the new Sony Pictures film “The Brother’s Grimsby” has Sony executives shaking in their seats. In his new film, Sacha Baron Cohen, of “Borat” fame, depicts boastfully litigious Republican presidential front runner “Donald Trump”—or his impersonator— accidentally contracting HIV, according to The Huffington Post.

At screenings in the U.S. and abroad, raucous audiences have been cheering and applauding the scene. Now, Sony Pictures has reportedly decided to pull back its promotion of the film, limiting the marketing of the outrageous satire. The “loud cheering” and group applause from international audiences is fueling worldwide tensions and growing concerns that Trump, who has been called a panoply of “[insert adjective] demagogue” varieties, will be the next president of the United States.

According to industry sources familiar with the situation, Sony is concerned about the reaction of the @realDonaldTrump, who rarely takes kindly to criticism—humorous or otherwise. Beyond calling Cohen a “loser,” or a lightweight,” the studio has real fears that a vengeful Trump, who “never settles,” may create more controversy than the studio cares to bear.

Interestingly, due to Cohen’s acting and producing clout in Hollywood, the comedian has final cut, or authority, over the film. So, even if Sony pushes to have the scene removed, which they appear to have done, Baron will have the final say on whether the scene makes it to wide release.

This isn’t Sony’s first rodeo with controversy. In November 2014, Sony Pictures Entertainment was hacked by the “Guardians of Peace,” a group the FBI claims has ties to North Korea. The group threatened terrorist attacks against theaters that showed the “The Interview,” a 2014 American political satire comedy film co-starring Seth Rogen and James Franco. Yet, Sony may be looking at this the wrong way. “The Interview” was Sony’s most successful digital release, grossing $40 million in digital rentals.

“They’re subtly trying to make it disappear so Donald Trump doesn’t sue the studio, and also if Donald Trump wins, then they don’t have a major problem with the corporation where they’ve alienated the president,” a source told The Huffington Post.

Jean Guerin, a spokesperson for Sony Pictures, rebuked claims of studio fears. “This is utter nonsense. We have been supportive of the filmmaker and the film.”

“The Brothers Grimsby” opens March 11 in the U.S.