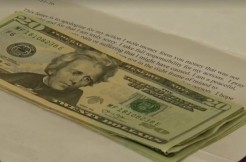 A dry cleaner in Baltimore says that one robber did the right thing. Helen Paik shared an apology letter from the man she said held up her business on September 6.

“This letter is to apologize for my actions,” said the unsigned letter obtained by CBS Baltimore. The envelope, postmarked the same day as the robbery, included $120. “I stole money…that was not mine to take and for that I am truly sorry. I take full responsibility for my actions. I pray for your forgiveness. I am a peaceful, kind and lovable man but when I do drugs, I am not in the right frame of mind to function properly. I hope you fund it in your heart to forgive me for what I have done.”

Paik told that outlet that she forgives the man, and that she’ll donate the cash to a drug rehab charity.

Plot twist: Joe Curren, father-in-law of ex-Maryland Gov. Martin O’Malley, said he witnessed the robbery, and tried to stop it with his cane.

The suspect was caught on surveillance footage, but has yet to be identified by police. He is still wanted for assault and robbery.