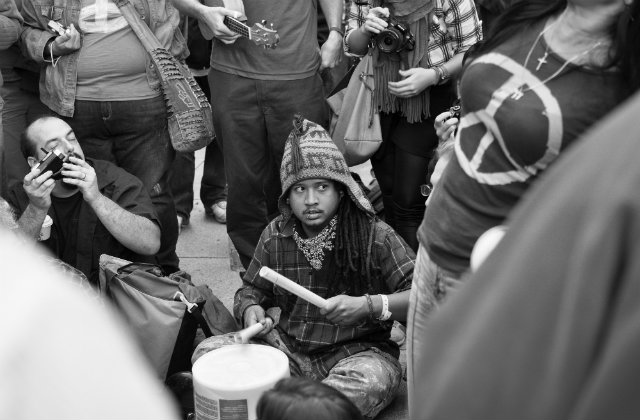 Sometimes, I really wonder whether only the most absurd among us get elected to public office. This week, Democratic Philadelphia Councilman Mark Squilla introduced a bill that would outlaw drumming. Yes. That’s what I said. The legislation would make it illegal for anyone to play percussion outdoors. And that includes drumming on buckets, cans, the sidewalk, or tin cans.

Check out the proposed language:

“Use of Drums and Similar Devices. No person shall produce percussive sound using hands, sticks, or other devices in combination with any type of drum or cymbal, or with a device or object utilized in the manner of a drum or cymbal, such as a news box, bucket, can, or metal plate, outside of a structure in the area bounded by the Delaware River, the Schuylkill River, Washington Avenue and Spring Garden Street, which sound is audible at a distance greater than one hundred (100) feet from the location of such drum, cymbal, device or object, unless such drum, cymbal, device or object is being used in connection with a permitted or licensed activity or event.”

That is some next-level Footloose-style nonsense if I ever heard it. We already have public nuisance laws, which regulate obtrusive sounds; but prohibiting music? At all? Anywhere? I can only wonder what motivated the drafting of such legislation. Squilla’s office told media that Center City restaurants and other institutions “may have been bothered by drumming late at night.” Right. So clearly, we should legislate away anything that “bothers” others.

In addition to the utter lunacy of barring the soundtrack of city living, this bill is like a law-school exam example of terrible drafting. It’s simultaneously too narrow and too broad. The bill would ban drumming at any time of day, in any context (without a specific license), but would not ban any other kind of music. Philly residents were quick to point out that in a city in which drum lines are kind of a thing, this bill raises some not-too-subtle cultural concerns.

Another heavy-handed bill by @CMMarkSquilla targeting musicians. These children in drum lines are learning music (which is increasingly harder in Philly public schools) as well as a sense of community. This will get tabled just like your licensing bill.https://t.co/Mh3jTpRvSU

.@CMMarkSquilla your “No Drums” bill is reminiscent of slave codes stifling black communication. Not good. https://t.co/Xup1adgxQK

@CMMarkSquilla stop this misguided attack on youth and musicians. An outright ban is racially targeted and ridiculous https://t.co/xvCtqubVft

The rest of the city council has recognized the tone-deaf nature of Squilla’s proposal, and has chosen to hold the bill over for now. Let’s hope it stays that way.

I’m a fan of yours Councilman but this would be a ban on things that make #Philly Philly. Does this mean no more drum lines? That’s public drumming? #YoureBeatingTheWrongDrum

On this matter, if anyone should tacet, Councilman, it’s you.