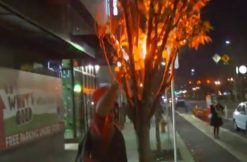 Demonstrators were coming out against President-elect Donald Trump on Thursday night, but authorities say things started to get ugly.

Increasing reports of vandalism and aggressive behavior in protest crowd. People not wanting to be associated are encouraged to leave area.

Due to extensive criminal and dangerous behavior, protest is now considered a riot. Crowd has been advised.

Cops said people threw “projectiles” at them, and were armed with rocks.

Some in crowd trying to stop property damage, others threatening them not to interfere. Riot now at Northwest 11th & Lovejoy in the Pearl

At about 1 a.m. early Friday morning, they estimated that 1,500 people made up the crowd. Pepper spray, rubber baton rounds, and rubber ball distraction devices were used. 26 arrests were announced at 5:19 a.m.

This article will be updated with the forthcoming information on arrests and charges.

The President-elect has responded to recent protests with a pair of tweets.

Just had a very open and successful presidential election. Now professional protesters, incited by the media, are protesting. Very unfair!

Love the fact that the small groups of protesters last night have passion for our great country. We will all come together and be proud!