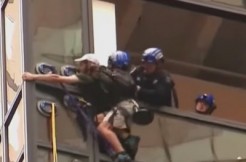 You know the guy who climbed Midtown Manhattan’s Trump Tower on Wednesday? He’s been identified. Sources told The New York Daily News his name is Stephen Rogata, a 19-year-old from Virginia.

NBC New York reports that Rogata was charged on Thursday with reckless endangerment and criminal trespass. Authorities are looking into a video posted on Tuesday to the YouTube account, Leven Thumps. In a message addressed to Donald Trump, a guy in a hoodie explained “the reason I climbed your tower”: He wanted to speak to Republican presidential nominee. Police told Fox that Rogata is the guy in in the video.
–