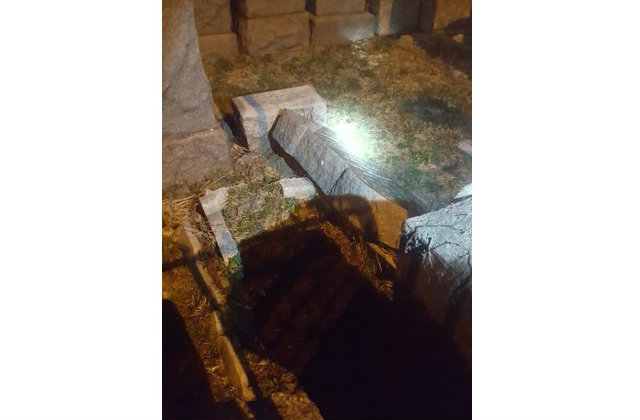 Update – March 5, 2:01 p.m.: hereThe NYPD is now saying they’ve found no evidence of vandalism. Click for the AP’s story on this development.

NEW YORK (AP) — The New York Police Department is investigating a report of possible vandalism at a predominantly Jewish cemetery.

An NYPD spokesman says Sunday the department’s hate crimes division has been notified of headstones found toppled over at Washington Cemetery in Brooklyn.

Assemblyman Dov Hikind tweeted photos Saturday night showing some headstones on the ground. The Democrat says he’ll go to the cemetery Sunday to see them.

There has been a rash of vandalism at Jewish cemeteries and 122 bomb threats called in to Jewish organizations in three dozen states since early January.

Authorities said Friday that Juan Thompson, a former journalist fired for fabricating details in stories, made at least eight of the scores of threats against Jewish institutions nationwide as part of a campaign to harass and frame his ex-girlfriend.