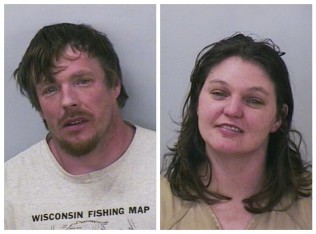 A Polk County, WI sheriff’s deputy received quite a shock when he approached a car he stopped after several motorists called into dispatch to report seeing it driving erratically on a narrow and winding rural road. Deputy Jeff Hahn reported finding a 9-year-old girl behind the wheel and two very intoxicated adults, along with an 11-month old baby also riding in the car.

According to a criminal complaint, Jason Roth and Amanda Eggert were too intoxicated to drive so they allowed their 9-year-old daughter to try to drive them home. A preliminary sobriety test revealed Roth had a BAC of .25, over three times the legal limit to drive. Both pleaded not guilty in Polk County Circuit Court on Friday to several felony charges, including recklessly endangering safety and child neglect.  Eggert faces additional charges as the result of fight she had with paramedics who tried to help her with a wound that she suffered earlier in the day as the result of a snowmobile accident.

At the preliminary hearing last week, Deputy Hahn testified that the 9-year-old exited the truck with it still running and in drive. He says he then had to jump into the truck to hit the breaks and put it in park to prevent it from rolling down a steep hill.

Roth and Eggert are scheduled to appear in court again on March 11.