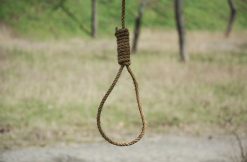 On Friday, someone added black students at the University of Pennsylvania to a racist GroupMe account called “Mud Men” and an associated event called “Daily Lynching.” Check out screengrabs below. [Please note that the images below feature foul language.]

Happening at #UPenn: A Facebook group called “Mud Men” was created w/ every black person from the class of 2020 and schedules to lynch them. pic.twitter.com/bzWTQcJp0A

Black students throughout @Penn‘s campus, like myself, have been added to this hateful GroupMe. I am petrified and all I want to do is cry. pic.twitter.com/DrqLvpXAW5

But who did it remains unclear [See updated allegations below], though UPenn said the account seems to be based out of Oklahoma. Here’s their statement from Friday afternoon.

A statement from Penn on the current events on campus. pic.twitter.com/CALK7OERup

Update – November 12, 10:31 a.m.: UPenn announced that local police have been working with the FBI and Oklahoma cops on this. According to the statement, the University of Oklahoma president reached out to say that “there is a basis for temporarily suspending one of their students as they investigate his involvement in the matter.”

An Update to the Penn Community on Racist Messages Directed at Penn Students⠀
⠀
We wanted … https://t.co/PK8O10cb18 pic.twitter.com/FgLNZCNISj

[image via Prokof and Shutterstock]