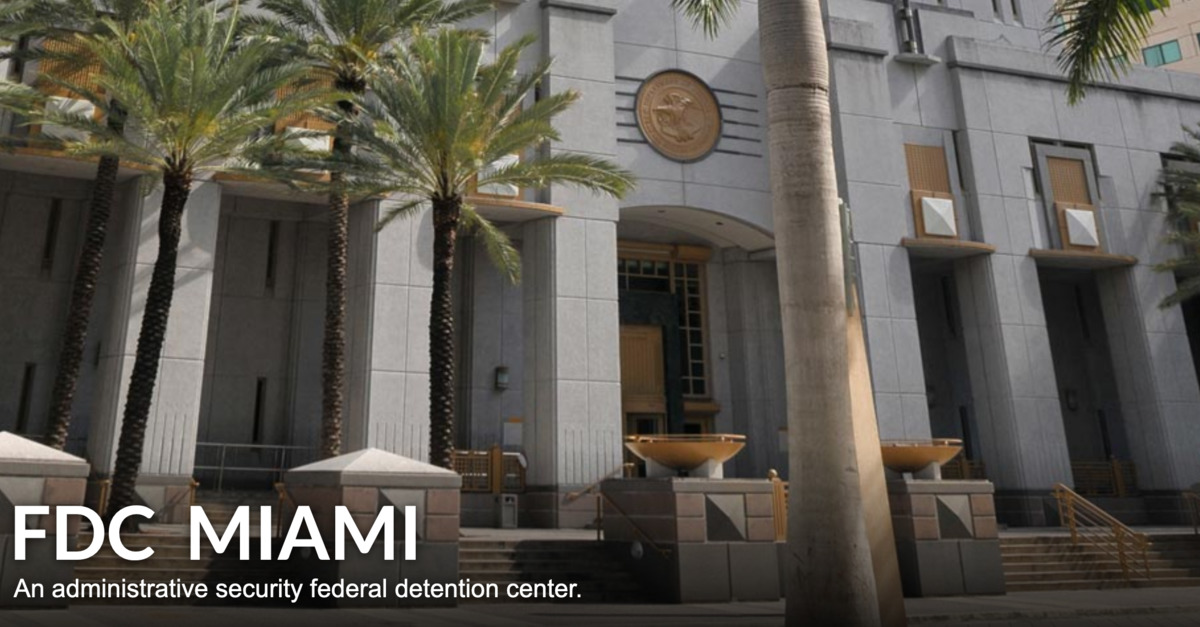 A 68-year-old man in Florida died from the novel coronavirus (COVID-19) on Sunday while in being held before trial on a nonviolent drug charge. The man, Ivan Gonzalez Ramirez, was transported from the Federal Detention Center (FDC) Miami to a local hospital in the area last Monday after notifying prison guards about a shortness of breath.

The Bureau of Prisons pointed to the man’s preexisting conditions in a brief statement released Tuesday.

The statement also noted that Gonzalez Ramirez was “awaiting trial for Possession with Intent to Distribute Cocaine” at the time of his death and that he had been incarcerated for the mid-level drug offense at FDC Miami “pending trial since April 3, 2020.”

“This was a preventable tragedy,” civil rights attorney R. Andrew Free told Law&Crime. “The point that I think is important to takeaway is: the government knows how to prevent deaths like these and that is by releasing individuals pre-trial on less-restrictive alternatives to incarceration, including home-monitoring and ankle monitors.”

“By choosing not to avail itself of those alternatives, the government knows and accepts the responsibility of those people dying,” Free added. “These are preventable deaths and that’s what happened in this case.”

Vanita Gupta, president and CEO of the Leadership Conference on Civil and Human Rights, originally noted the death on Twitter.

The Leadership Conference on Civil and Human Rights has been heavily critical of the BOP’s and the Department of Justice’s (DOJ) response to the COVID-19 pandemic.  The group’s leadership earlier this month testified before the Senate Judiciary Committee to call for the release of prisoners and non-criminal detainees who are at heightened risk of contracting the virus.

“We have long known the real danger that comes with incarceration and detention, and the horrific conditions under which people in the custody of the United States must survive,” noted the group’s Executive Vice President LaShawn Warren. “The recent public health crisis puts those pre-existing conditions, and the disparate impact on African Americans and the Latino community, in sharper focus. We all must work together to release as many people as possible from federal custody to ensure that their actions do not result in a death sentence.”

[image via the Federal Bureau of Prisons]