The Reason Why The Establishment Opposes Bernie Sanders and Donald Trump 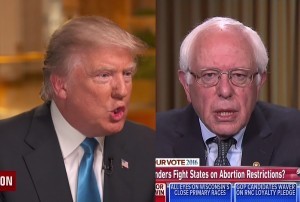 Both political parties depend on large donations from banks and corporations. So too do candidates running for office.

What do the banks and corporations get in return?

Money right back at ya. Big money. Directly and indirectly. Money through the Export-Import Bank, money through the Federal Reserve and most of all, money by creating artificial monopolies through selective enforcement of regulations.

First there is direct corporate welfare. This is not the biggest source of income, in fact, it is the least, but it is the easiest for the public to understand so I will begin there and tell more in later posts.

Billions of dollars are given to companies directly from the U.S. Treasury. In fact, twice as much money goes to corporate welfare than to welfare for the poor. The latter is a point that Bernie Sander’s supporters like to make.  Look it up yourself.

These grants are smothered in honorable language, “to create jobs, to stimulate the economy, to protect the environment, to redress past wrongs,” the list goes on and on. Special interest groups, some of them well-intentioned, promote these “causes” but in the end, the establishment corporations make most of the money.

There are sometimes very compelling and logical reasons for corporate welfare. When I was in the White House a major company wanted millions of dollars to compete in France. They said that the French saw their company as a cultural invasion and so the French government was subsidizing their own.

But whatever the reason, the bottom line is this, the big companies get money from the government for their business and YOU don’t.  If you start a company you are on your own and worse, you will be subsidizing your competition with your very own tax dollars.

Oh yeah, once they get that money they turn around and give it back as donations to the politicians and political parties that helped them get it.

When you read that the establishment is backing Marco Rubio or now, reluctantly, Ted Cruz, that is where some of that backing comes from. When there was a misquote from the Chairman of Goldman Sachs saying he was fine with either Jeb Bush or Hillary Clinton as president, that was why it was so widely believed. And that’s why it raised eyebrows when Ted Cruz forgot to report a $750,000 loan from Goldman Sachs that launched his political career.

Forget about liberal and conservative. Think in terms of insider and outsider.

When I worked in the White House conservative businessmen came in to make sure I was onboard for federal dollars going to their companies.

“This is our chance,” they explained. “We are in power. The liberals do it.  We have to do it too.”

This is how the liberal-conservative equation has become compromised. Liberals will push for environmental legislation but then exempt companies that give them money. Conservatives will criticize fraudulent welfare abuse but award money to companies that overcharge for worthless services.

Yes, there are good people in the middle of this. People who believe in their cause. Private contractors who give good service to the public, government servants who give their lives to help others. But the poor continue to get poorer and the rich continue to get richer.

Socialism is the poor man’s way to “game” the system. They will get YOU to pay for their rent, their food, their education. It’s popularity shows how hopeless the public is about corruption.