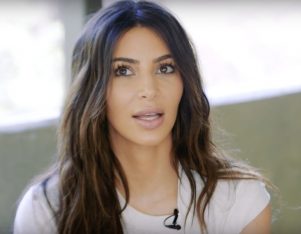 In the past, it has not been uncommon to see Kardashian post photos on social media showing various pieces of her expensive jewelry collection.  This Instagram post from only six days ago features a $5 million diamond ring that she received last month as a gift from husband Kayne West:

In the aftermath of reports that Kardashian was robbed earlier this week at her Paris apartment, some critics have argued flashy social postings like this made the reality-tv star a target for thieves.

Now, if a new report from TMZ is to be believed, Kardashian appears to be taking the advice of critics to heart.

Sources tell the celebrity news website that Kim was so shaken up by the robbery that she is now privately saying things like, “Material things mean nothing. It’s not all about the money,” and “It’s not worth it.”

As part of her new outlook life, the sources say Kardashian plans to seriously cut back on her social media posts.  Not only will we no longer see flashy pictures of Kardashian showing off  multi-million dollar pieces of jewelry, but the report states she even plans to tone down how she promotes her fashion line.