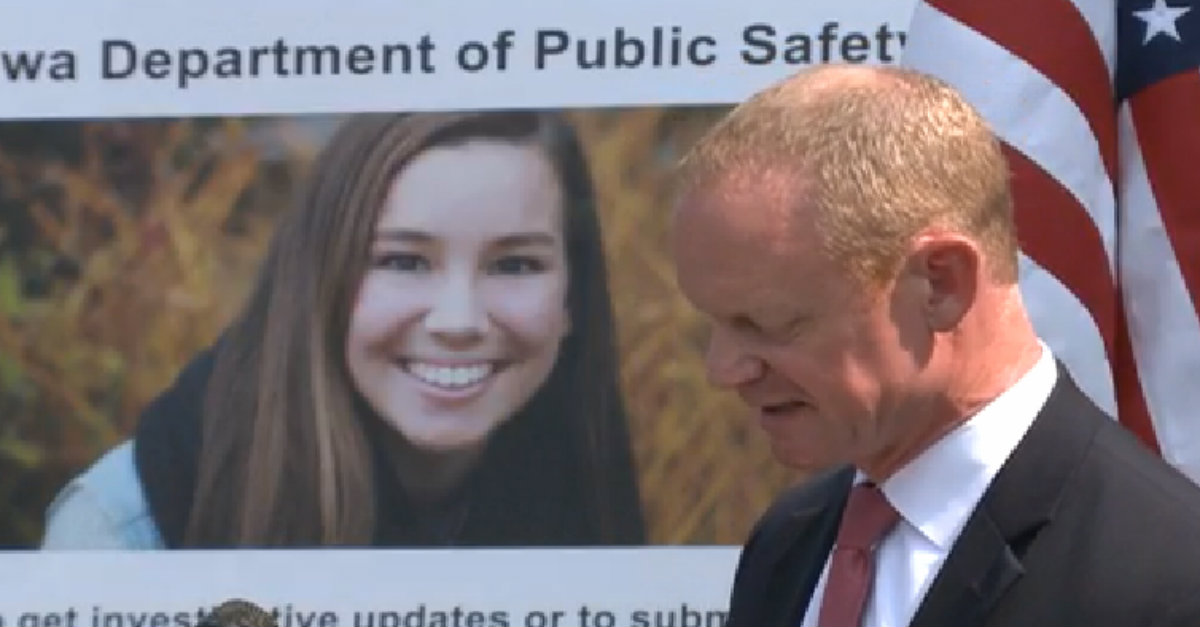 At least one member of Mollie Tibbetts‘s family would like conservative commentators and politicians to stop using Tibbetts’ death as a political prop against immigrant communities.

Sam Lucas says she is Mollie Tibbetts’ second cousin. And Lucas made her forceful request in a Tuesday night Twitter exchange with far-right commentator Candace Owens, who is affiliated with Charlie Kirk‘s Turning Point USA.

A few hours after Tibbetts’s body was discovered by authorities, Owens tweeted, “Leftists boycotted, screamed, and cried when illegal immigrants were temporarily separated from from their parents. What will they do for Mollie Tibbetts? What did they do for Kate Steinle? They will NEVER see their parents again.”

hey i’m a member of mollie’s family and we are not so fucking small-minded that we generalize a whole population based on some bad individuals. now stop being a fucking snake and using my cousins death as political propaganda. take her name out of your mouth…and fyi @RealCandaceO, my whole family is hurting right now and you’re not helping. you’re despicable and this is so far from the loving and kind soul that mollie was. my prayers go out to you in hopes that maybe you’ll become a better person. not hedging my bets tho

and fyi @RealCandaceO, my whole family is hurting right now and you’re not helping. you’re despicable and this is so far from the loving and kind soul that mollie was. my prayers go out to you in hopes that maybe you’ll become a better person. not hedging my bets tho.

Owens responded with an accusation against Lucas–essentially accusing her of not being upset about her cousin’s death. She wrote, “I find it strange that you have directed obscenities and hate towards people that support the President, but you have not directed a single bad word toward the monster who committed this terrible crime.”

To which Lucas replied, “I don’t have this mans twitter handle, or any way to contact him, but trust me, I have had nothing but evil thoughts about this man. HE is a devil. That doesn’t mean that everyone like him is. I think it’s despicable that you’re using her death to push a political agenda.”

Other Twitter users went after Lucas–attempting to make some variation of Owens’ original argument. Lucas repeatedly shut them down. One man noted that he wasn’t trying to generalize a population, but just wanted “a proper vetting procedure.” Here’s how that exchange went:

cool but do you realize that you did exactly the same thing that i DIDNT WANT, which was put a political discourse around my cousins tragic death? but yeah please argue about border control when my whole family is beside ourselves with grief. fuck off dude. have some empathy

In another tweet directed at no one in particular, Lucas made her position crystalline. She wrote, “as a member of Mollie’s family, thank you. attn Trumpists: Mollie’s death is not political propaganda to bring up your ‘build the wall’ bullshit. stop.”

Lucas also shared a message from Tibbetts’s aunt Billie Jo Calderwood, who made a more subtle criticism of the conservative media outrage coverage:

Please remember, Evil comes in EVERY color. Our family has been blessed to be surrounded by love, friendship and support throughout this entire ordeal by friends from all different nations and races. From the bottom of our hearts, thank you.

Law&Crime reached out to Lucas for further comment but no response was forthcoming at the time of publication.

After Tibbetts’ body was found in an Iowa cornfield on Tuesday afternoon, the Poweshiek County Sheriff’s Office almost immediately announced they had a suspect in custody. Cristhian Bahena Rivera is an immigrant who has worked as a farmhand in the Brooklyn, Iowa area for several years. The farm in question–where Rivera was employed–is owned by a prominent local Republican family.

There has been some confusion about Rivera’s exact immigration status, even here, given the police announcement that a suspect had been arrested. But conservative media outlets and politicians took the issue of Rivera’s immigration status and ran a few miles around the block.

President Donald Trump used Tibbetts’ death to justify his plans for a wall along the U.S.-Mexico border at a night rally in West Virginia. The official White House Twitter account later tweeted about the University of Iowa student’s tragic death while mockingly invoking the administration’s family separation policy. But that’s not all.