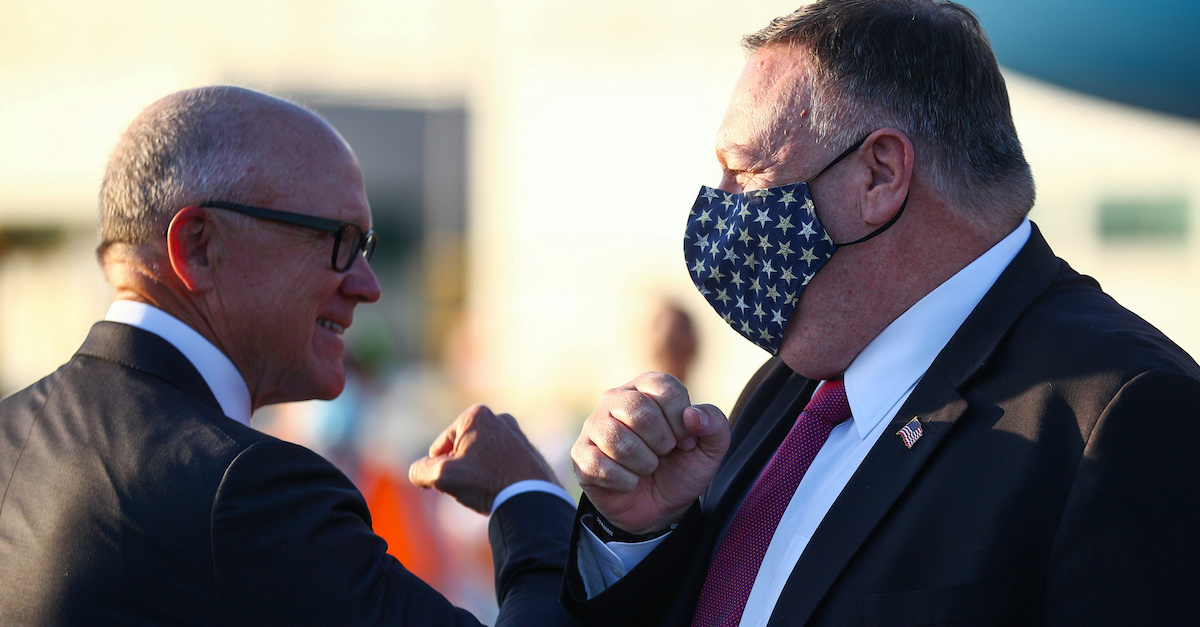 Woody Johnson, the co-owner of the New York Jets and the U.S. Ambassador to the United Kingdom, “sometimes made inappropriate or insensitive comments on topics generally considered Equal Employment Opportunity (EEO)-sensitive, such as religion, sex, or color,” a report from the State Department’s Office of Inspector General said Wednesday.

The State Department “disagreed” that it needed to conduct a “more thorough review” about whether EEO laws had been violated because Johnson had watched a video about “mitigating unconscious bias” and encouraged “all” other “section and agency heads to do the same.”

Recommendation 1: The Bureau of European and Eurasian Affairs, in coordination with the Office of Civil Rights, should assess the Chief of Mission’s compliance with Department Equal Employment Opportunity or leadership policies and based on the results of the review, take appropriate action. (Action: EUR, in coordination with S/OCR)

Management Response: In its July 1, 2020,2 response, the Bureau of European and Eurasian Affairs disagreed with this recommendation. The bureau stated, that given the concern expressed, the Ambassador has viewed the Office of Civil Rights video on workplace harassment and has instructed all section and agency heads to do the same. He has also encouraged all staff to take the Foreign Service Institute training on mitigating unconscious bias. The bureau also represented that the Ambassador “is well aware of his responsibility to set the right tone for his mission and we believe his actions demonstrate that.” Accordingly, the bureau reported it did not believe a formal assessment was required, but proposed that, in coordination with the embassy, it would instead work with the Office of Civil Rights to provide advice and additional training to all staff, including the Chief of Mission, to heighten awareness on these important issues.

OIG Reply: OIG considers the recommendation unresolved. OIG acknowledges the actions that the mission has taken with regard to training of staff and the stated bureau proposal to work with the Office of Civil Rights to provide advice and additional training to all staff. These actions, however, do not address the recommendation which calls for an assessment of Chief of Mission compliance with Department Equal Employment Opportunity or leadership policies. The recommendation can be closed when OIG receives and accepts documentation that the Bureau of European and Eurasian Affairs has met its obligations under 3 Foreign Affairs Manual (FAM) 1526.2.

Johnson’s response to the investigation was included in the report (see page 32). Johnson said he would “deeply regret” it if he “unintentionally offended” anyone, but denied that he had discriminated against employees:

During my tenure as U.S. Ambassador to the United Kingdom and indeed for the entirety of my professional life, I have respected both the law and the spirit of EEO principles and have ensured that all employees under my direction do the same. If I have unintentionally offended anyone in the execution of my duties, I deeply regret that, but I do not accept that I have treated employees with disrespect or discriminated in any way. My objective is to lead the highly talented team at Mission UK to execute the President’s policies and to do so in a way that is respectful of our differences, with zero tolerance for discrimination of any kind. I believe that team cohesion in our mission is better than ever and as is stated in the OIG report’s narrative, that I have taken extensive measures to get to know all of the staff and thank them for their contributions. I am especially proud of how the Mission UK team has handled these challenging times of COVID-19.

In order to address the concerns documented in your report, perceived or real, I have reviewed an S/OCR course on discrimination in the workplace and have instructed the entire Mission UK country team to do the same, with 100% compliance by the end of May. I respectfully disagree with Recommendation 1 and ask that the OIG consider the absence of any official complaints against me during my three year tenure and the generally positive tone of the OIG report on Mission UK before including the recommendation in the final report and concluding that my actions have negatively affected morale.

CNN reported in July that it was alleged Johnson said some things to staffers that were “pretty sexist” and “racist.”

“Robert Wood ‘Woody’ Johnson, the top envoy since August 2017 to one of the United States’ most important allies, made racist generalizations about Black men and questioned why the Black community celebrates Black History Month, according to exclusive new information shared with CNN by three sources and a diplomat familiar with the complaints to the State Department inspector general,” the CNN report said. “His comments about women’s looks have been ‘cringeworthy,’ a source with knowledge of the situation said, and two sources said it was a struggle to get him on board for an event for International Women’s Day.”

Johnson, a Johnson & Johnson heir, has been U.S. Ambassador to the UK since Aug. 2017. He donated to President Donald Trump’s 2016 campaign.