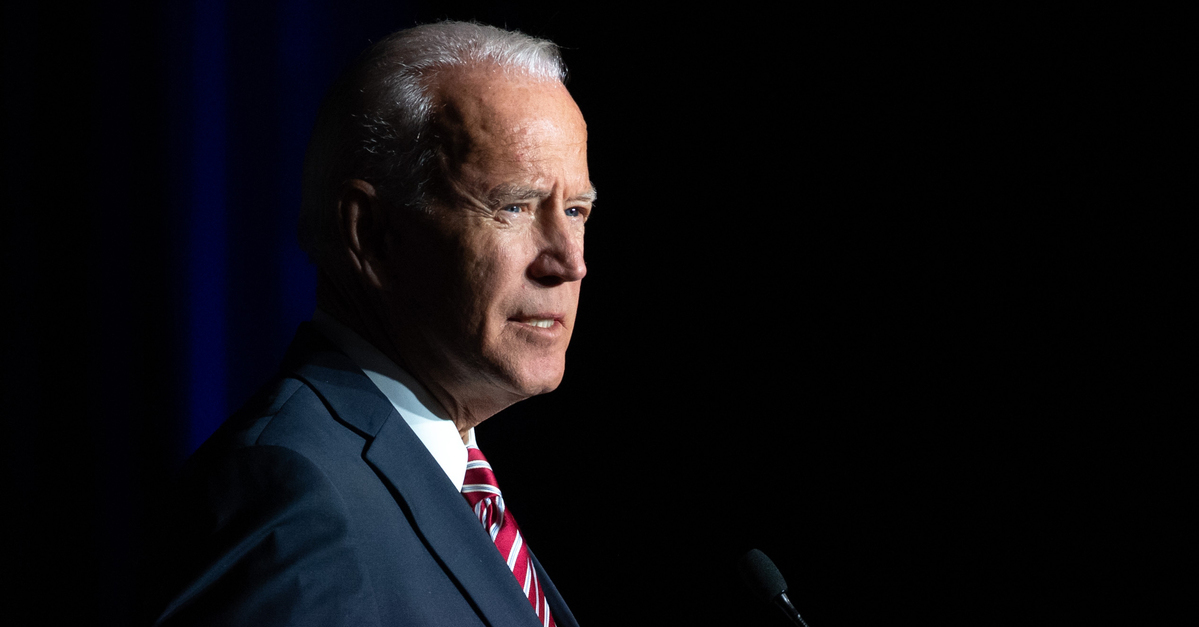 On May 1, Eva Murry came forward to allege that former vice president and presumptive 2020 Democratic nominee Joe Biden sexually harassed her at a dinner in 2008. Law&Crime published her account (which has now been updated) along with corroborating witnesses who asserted that she had shared the details with them. Thirty-six hours later, the Biden campaign responded and denied that allegation by providing a series of documents that cast doubt on one of the key specifics of Murry’s allegation.

Murry had alleged the incident occurred at the First State Gridiron Dinner & Show in 2008 when Biden was still a senator from Delaware. He had recently stopped running for president but had not yet been chosen by then Sen. Barack Obama to be his running mate. A PDF version of Biden’s senatorial schedule for Saturday, May 3, 2008, the date of the dinner in question, has now been shared with Law&Crime and is sub-headlined with the phrase “REGRETS IN DELAWARE.”

The specific entry for the event in question notes:

According to this schedule, a staffer named “John” attended the dinner.

The next document provided by Biden’s campaign to dispute Murry’s claim is the Sunday, May 4, 2008 edition of The News Journal out of Wilmington, Delaware.

A story titled “Biden back home after surgery” reads:

When Sen. Joe Biden, D-Del., quit the presidential race back in January, he said he would head home and get back to important matters in Delaware and the Senate.

Most thought that meant things like the Iraq War, funding for added police on the streets, fighting domestic violence — things Biden had made signature issues in his four decades in politics.

Little did we know that one of the priority matters was simply — breathing.

Biden, 65, is back home after having surgery Tuesday in Philadelphia to deal with significant sinus issues including a deviated septum.

“We anticipate that he’ll be out for the remainder of the week recovering at his home in Wilmington, his spokeswoman, Annie Tomasini, said before the surgery. 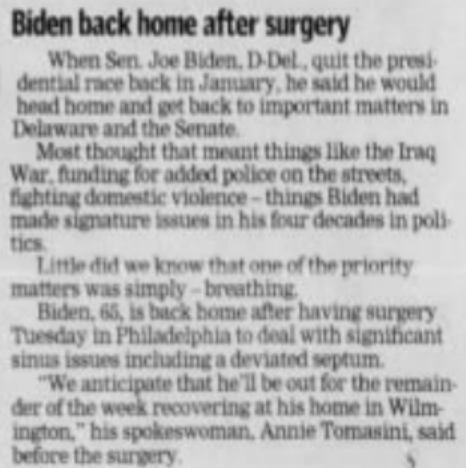 The campaign also provided a brief news item from National Journal’s CongressDaily dated April 29, 2008 which made prior note of the above-reported sinus surgery.

“Sen.Joseph Biden, D-Del., will have outpatient surgery today on his sinuses and to repair a deviated septum, his office said,” according to that blurb. “During Monday’s Jefferson-Jackson-Bailey dinner in Connecticut, he described the procedure as small. He said he would be out of work for a week.”

Finally, the Biden campaign provided a letter written by attorney J. Brian Murphy, which identifies himself as the former vice-president of the First State Gridiron Dinner. In this letter, Murphy explicitly disputes Biden’s attendance at the event in question.

The letter reads in full (minus personal information):

To whom it may concern:

I am writing as the former Vice-President of the First State Gridiron Dinner. This statement is regarding the attendance of former Senator Joe Biden at the 2008 Dinner held on May 3, 2008 at the Chase Center on the Riverfront in Wilmington, Delaware.

After reviewing my files of the dinner which included attendees and the show itself, I can conclusively say, Senator Biden was not at the dinner. The annual dinner is attended annually by 300 to 400 elected officials and prominent Delawareans. The year 2008 is particularly noteworthy because it is the only year where the Senator agreed to appear in a video, which was a spoof of Meet the Press. It was taped earlier that week. It was our hope the Senator would attend the dinner to see the video, but he sent regrets. Had he been there, myself as well as others would have known and in fact, I would have acknowledged him from the stage.

Senator Biden was not at the Gridiron Dinner in May of 2008.

“The Biden campaign is now trying to make it seem like Joe Biden never even attended the event (that year) they are saying he had a sinus infection and sent some one is his place, only that year,” she wrote. “They are saying he attended all the other years EXCEPT the one year my incident happened. This is crazy to me and saddens me.”

“I just wanted to post this to say, I am NOT lying I never was lying and I stick with my original truth, and that won’t change,” she added.

Murry’s friends and sister still confirm that their memories as detailed in the Law&Crime story are accurate.

“I don’t think Eva would have gotten the person wrong,” Murry’s older sister Jenna Murphy told Law&Crime when asked if her sister had a case of mistaken identity at the dinner that year. “She named him really specifically at the time and saw him several times after and recognized him as the person who made the comment. If anything, maybe she could have confused the date, but I really don’t think she could have gotten the person wrong.”

The elder Murry insisted that her sister wasn’t mistaken.

“To provide context for my certainty, my aunt Chris got our whole family involved in her work, so both my grandparents, my aunt Jenny, Jenny’s wife, and even on one notable occasion our entire extended family, went to campaign events with her from well before 2008 up through 2010,” she continued. “All of those people were aware of the story of the Biden comment told by both my aunt and sister so a case of mistaken identity doesn’t seem likely.”

Editor’s note: this article has been amended post-publication to remove a line stating that a Biden staffer attended the Gridiron Dinner “in lieu of Biden himself.” The document does not contain that language. Additionally, this article was amended to protect personally-identifying information and to provide the full suite of documents provided to Law&Crime.