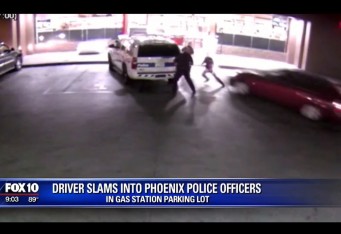 Three Phoenix police officers, including one working his first shift, are lucky to be alive on Wednesday. Investigators say a man intentionally sped his vehicle towards the officers and plowed through them, sending the rookie cop cartwheeling through the air.

Fox 10 News in Phoenix reports the incident occurred early Tuesday morning outside a Quik Trip gas station in the Valley. The gas station provided the affiliate with a video copy of the incident that was captured on the gas station’s surveillance camera network.  The video might be difficult for some to watch.

As you can see in the video, the driver of the vehicle appears to take dead aim at the group of officers gathered outside a police SUV.  The man behind the wheel was driving fast enough to hit the larger police SUV with enough force to move it over almost an entire parking space.  In the process, he struck two of the three officers, as the third just barely managed to get out of the way.

An extended version of the video that includes the struggle to arrest the suspect is also available online.

Amazingly, the rookie cop who cartwheeled through the air was back on his feet in seconds, attempting to help the uninjured cop subdue and arrest the driver.

“Unbelievable.. our officer hits glass, gets back up, takes suspect in custody, runs over us, still fights with us as we try to take him into custody,” Phoenix Police Chief Joe Yahner told reporters.

The suspect was taken into custody with the aide of a taser, according to the report.

The third cop, identified only as a sergeant, suffered a broken leg and can be seen struggling to get to relative safety under the police SUV. The rookie cop joined the sergeant in the hospital after the arrest.  The third officer did not seek treatment.

Marc L Payne was booked into MCSO Jail by Phoenix Pd after he struck 3 PPD Officers with his vehicle at a QT pic.twitter.com/kzpfTStsTT

The news station reviewed local jail records and discovered this is not the first time Payne has been accused of attacking Phoenix police officers.  Court records show back in 1997 Payne was charged with assaulting a Phoenix police officer during a traffic stop.  According to the records, Payne had a warrant out at the time of the stop and when officers tried to arrest him, he fought back.  He received probation in that case.

There is currently no information on bail or when Payne will make his first court appearance.   He is being held in the Maricopa County jail.