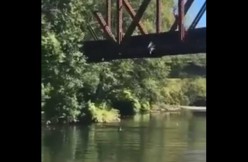 You’ve read the headline, and are probably freaking out. So let’s get this out of the way: The boy is reportedly okay and in the hands of child protective services.

Video shows this 4-year-old getting tossed off a train bridge in Montesano, Washington on August 24. As King 5 points out, the spot is popular among swimmers dipping into the Wynoochee River below. The Grays Harbor County Sheriff’s Office announced that according to the mom, it was the kid who actually wanted to jump into the river, and that a “man she had just met” agreed to throw him.

Facebook user Kaylub Fawley caught the incident on video, and posted it online. Note that there’s some audible cursing. Certain bystanders were…displeased to see this:

This is what happens when some parents just don’t care…this is a woman me and all my friends witnessed letting a “stranger” throw her 4 1/2 year old son of the bridge yesterday into the water for fun!! He landed straight on his upper back so the The police were called and I hope this isn’t just waived by and looked over #takethekid #wefreaked #cps? And shoutout to the homies that took a stand and called them out

And no, this wasn’t “waived by and looked over.” The mother and the guy, 35-year-old Jeremiah Goodwin, have been charged with reckless endangerment. On top of that, local child protective services took the boy and a sibling out of the mother’s custody on Wednesday. The family dog was also seized, and brought to an animal shelter.
–