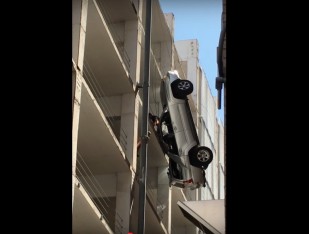 A man in Austin, TX is both incredibly lucky and incredibly unlucky all at the same time. Unbelievable video taken at the scene on Friday afternoon shows why.

First, the man appears to have somehow overshot his parking spot in a multi-story parking garage, leaving his car dangling at least five stories above an alleyway in downtown Austin.

Amazingly, KEYE TV reports the Austin Fire Department says the man is uninjured.  A YouTube video posted by a witness shows the driver crawling out of the vehicle and back into the parking garage:

Other witnesses tweeted video from the scene inside the parking garage shortly after the incident.

A video posted to Facebook earlier shows hundreds of people gathered on the street to catch of glimpse of what was going on.

Live video at the scene now shows firefighters slowly lowering the vehicle to the ground.