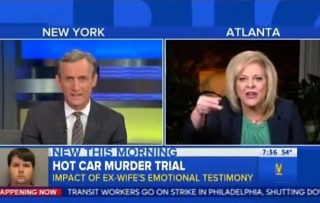 The Justin Ross Harris murder trial is in full swing, with the prosecution resting their case last week, and the defense now calling witnesses. Harris is accused of intentionally leaving his 22-month-old son Cooper in a hot car to die. He claims it was an accident. Harris is also facing charges for allegedly sending sexual images and messages to an underage girl, who testified earlier in the trial. On Monday, Harris’ ex-wife and mother of the child Leanna Taylor took the stand in Harris’ defense.

Abrams noted that some of the evidence regarding Harris’ internet history that was supposed to indicate he planned his child’s death turned out to be nothing. Harris was said to have visited a message board called “Child Free,” but in reality, someone sent him a link to it, and Harris responded by saying, “Grossness.”  Between weaknesses in the circumstantial evidence and Taylor’s discussion of how close Harris was with his son, Abrams said, “I’m starting to think this really, really could have been a horrible accident.”

Grace isn’t convinced. She’s firmly in the prosecution’s camp on this one, and pointed out how short the trip was between where Harris and Cooper had gone for breakfast and Harris’ office, where he left his son in the car instead of taking him to day care first. “I drove the distance,” Grace said, “what, he forgot his child was in the back seat in two minutes?” However, Grace also said that Harris “went in the car” later in the day, which isn’t accurate. Harris did return to the car after buying light bulbs, and he opened the door and put the bulbs inside, but he didn’t get into the car. Abrams called her out on this, and Grace responded by saying she didn’t care. “You need to care, because it’s a relevant fact,” Abrams said.

Despite all of the arguments, there was one thing they both agreed on: Harris should not take the stand.

LawNewz is providing live coverage of the trial with top notch legal analysis. You can watch on the LawNewz.com Facebook page.