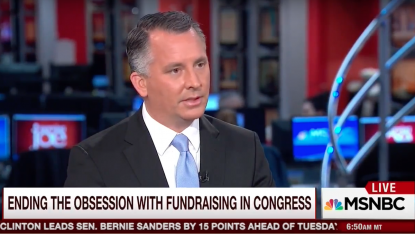 Republican Congressman David Jolly (FL) appeared on Morning Joe on Monday to discuss the issue of money in politics.  Congressman Jolly is attempting to introduce legislation that would put an end to the practice of lawmakers spending as much time raising money for their re-election as they do actually legislating.

“You’re paying [members of congress] $174,000 per year and they are spending half of their time shirking, shaking down the American people for money instead of doing their job,” Jolly said.

Congressman Jolly said his four page bill — short enough so that members of Congress can actually read before they vote on it — is designed to get Congress back to work.

“It simply prohibits the direct solicitation of a campaign contribution by a sitting member of Congress,” Jolly said.   “Challengers are left out of this bill.”

Congressman Jolly was also featured on a 60 Minutes report on Sunday about the pressure on members of  Congress to raise money.  In a report by Norah O’Donnell, 60 Minutes used undercover cameras to go inside call centers where members of Congress spend hours “dialing for dollars.”