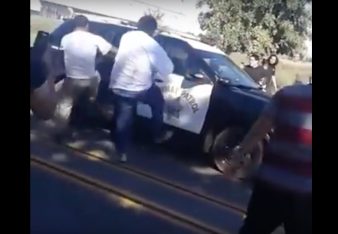 Authorities announced the arrest of three individuals they say were involved in a mob attack on a California Highway Patrol officer last month.

ABC30.com reports Federico Gonzalez, Gabriel DeAnda, and Milton Rodriguez are accused of inciting a riot and vandalism, causing more the $12,000 in damage to a CHP patrol vehicle.

Shortly after the incident, video of the attack was posted online and it quickly spread across social media.

According to the report, a CHP officer was responding to calls of illegal street racing and reckless driving when he was surrounded by a mob. Video of the incident appears to show individuals attacking the vehicle as it approached the scene. The officer was able to drive away and authorities say he did not suffer any serious injuries.