Why is the News Media Ignoring the Bombshell in Major Catholic Church Abuse Case? 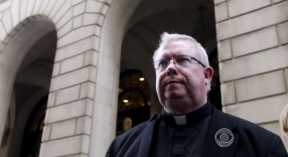 We are living in an era when, for better or worse, almost any person convicted of a high-profile crime can at least get a hearing in the media regarding theories of their innocence. This is the case even when they are obviously guilty and the notion of their exoneration is ludicrous (like with O.J. Simpson).

And yet there are still some situations where the innocence of people convicted of very serious crimes is far more than just the bad seed germinated by the imagination of a conspiracy nut, and yet their plights are effectively locked in a soundproof bomb shelter. One of those is unfolding in Philadelphia and deals with four men (three Catholic priests and a school teacher) who were sent to prison, with one of them already having died there, almost entirely on the word of one witness who was reportedly paid $5 million by the Church and who I now believe has now been discredited.

But, for some strange reason, neither the legal system, nor the news media, seems to give even the slightest of damns.

I’m referring to the case best known for the conviction of Monsignor William Lynn who was convicted of effectively running a cover-up of sex abuse crimes committed against an accuser known as “Billy Doe,” who was supposedly brutally abused, separately, by three employees of the Philadelphia Archdiocese. Lynn’s conviction has been overturned, twice, but is in the process of facing a possible retrial (even though, even if he is convicted, he could only theoretically serve another few months in prison).

At a hearing last Friday about the retrial, what was left of the already highly suspect case against all four men crashed and burned in open court in dramatic fashion. And yet the news media basically totally ignored this development.

The lead detective in the case, Joseph Walsh, essentially testified that he informed the prosecution that, for many substantive reasons, he did not believe “Billy Doe” and that he did not think he was a credible witness. According to Walsh, the Assistant District Attorney Mariana Sorenson responded, “You’re killing my case” and elected to go ahead with the prosecution as planned.

As explosive as this bombshell should be, coverage of it outside of Philadelphia has been basically nonexistent, while the Philadelphia Inquirer’s reporting was decidedly muted, devoid of any outrage, thin on the extraordinary implications of this development, and sans even the accuser’s name under the guise of protecting victims of sex abuse (a practice which, as with many which are well intentioned, can have the unintended consequence of making it far easier for a false claim to go un-repudiated).

This lack of media reaction might be somewhat understandable if this development was a truly a surprise, but to anyone who has closely followed the case, the fact that this happened should be about as shocking as waking up to an outrageous tweet from Donald Trump. I believe it has been very clear for at least a couple of years that the story of “Billy Doe” (I attempted to use his real name, which is in the public record, in this column, but my editor prevented me, which is a perfect example of how these injustices can happen in this realm with remarkable ease) maybe very bad fiction.

We know this mostly because of the tireless reporting of former Philadelphia Inquirer reporter Ralph Cipriano, who has written about the case numerous times for Newsweek and his legal blog. When you read the details of how the accuser’s testimony came to be, and how dramatically he changed his utterly nonsensical details, it is stunning that anyone ever believed him, even before the testimony of the lead detective in the case ended any serious doubt.

It should also be noted that one of those in the media who led the charge to champion the accuser’s claims was none other than Sabrina Erdely, who wrote about him glowingly for Rolling Stone. Yes that is the same disgraced writer and publication which just lost a major lawsuit over their misreporting of rape allegations at the University of Virginia.

So we have two men in prison, one who has died the worst possible death, and one still facing a possible (though now seemingly doubtful) retrial, all on the word of a man who, the evidence strongly indicates, is an admitted liar who milked the system out of millions of dollars. You would think that there would a huge push by the news media to try to rectify this massive injustice, but instead there has been none.

When it comes to sex crime accusations which result in media firestorms that lead to shady convictions born of a “moral panic,” the news media reminds me of the line from the movie “This is Spinal Tap” where the authorities suggested the string of mysterious deaths of the band’s drummers would be best left “unsolved.” Since they have obvious culpability, if there really was a wrongful conviction they are the very last people who are willing to accept such a scenario is even possible. Of course, if they were more concerned about doing their jobs than protecting their already shaky reputations, they would be the very first to see/expose what was really going on.

I interviewed Cipriano about all of this for my weekly podcast this past Sunday, and hearing the conversation is very much worth your time. He talks specifically about how he has gone to major mainstream news outlets with his information and been soundly rejected only because there was simply no appetite for debunking a narrative that they like and for taking a risk in order to report the truth, even with possibly innocent men rotting in prison. The news media will contemplate the innocence of almost any murderer if they think there are ratings to be had, but when the alleged crime is child sex abuse (when, unlike murder, because of the nature of the act, we rarely even know for sure that a crime even took place) the burden of proof to knock the halo off of an accuser and then safely pursue the real story almost requires a literal act of God.

My introduction to Cipriano begins about the 26 minute mark: