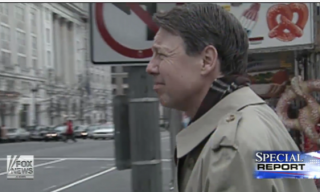 From Whitewater to the Lewinsky affair, David Kendall has been there for the Clintons. And now LawNewz.com has learned that the longtime Clinton attorney is also representing Hillary Clinton in the FBI’s probe into her private email server. He will likely not be far when she is interviewed by the FBI, which reports indicate is expected to happen soon. Kendall knows a thing or two about classified information: He helped former CIA director David Petraeus avoid felony charges when Petraeus allegedly gave “black books” to a mistress who was writing his book.

Several reports indicate that the FBI investigation has entered its final stages. So it is no surprise that Clinton would need a lawyer by her side, and who better than the man who has been loyal to the Clinton family for more than twenty years. The choice of Kendall is not shocking as he’s also been handling the State Department and Senate’s inquiry into her private emails for months now. There was some speculation that as the investigation reportedly intensified, she may hire another attorney to deal with the FBI’s probe specifically, but Clinton is staying with a friend she knows well.

Kendall is known to be somewhat media shy and usually avoids the spotlight (he turned down an interview for this profile piece). He first got to know Bill and Hillary Clinton as their classmate at Yale Law School in the 1970s.

Kendall joined the white shoe Washington D.C. law firm Williams & Connolly in 1978. On his own website’s bio, it says “David Kendall has had a checkered legal career. His acquaintance with the legal process began when he was arrested several times (but convicted only once) in Mississippi during the summer of 1964 while attempting to register voters.” He started off his career defending civil rights cases at the NAACP Legal Defense & Education Fund. He won the famous Supreme Court case, Coker v. Georgia which declared it unconstitutional to execute someone who committed the crime of rape.

But unequivocally, what thrust him most into the (unwanted?) spotlight was his defense of the Clintons over the last two decades. According to a 1998 Washington Post article that detailed the key players in President Clinton’s Lewinsky scandal, Kendall certainly has his critics:

Second-guessing Kendall has become a bloodsport in Washington where some of his fellow lawyers fault Kendall for not having Clinton come forward earlier with the truth about Lewinsky, for letting him testify … They also blame Kendall for pursuing a legalistic argument — that receiving oral sex did not constitute a sexual relationship — that has proved widely unpalatable.

Last year, he ran into media scrutiny again when he kept a thumb drive that contained potentially classified emails from Clinton’s private server at his law firm.

“In most situations like this you’d expect that a warrant would be issued and the Marshals and the feds, FBI, somebody would go and get the thumb rive and take it somewhere where it would be considered safe by the government,” national security attorney Edward MacMahnon Jr. told Fox News back in August.

Despite his forays with controversy, Kendall has a reputation as a dogged attorney with a great deal of integrity. He’s represented a wide range of white collar, and corporate defendants including Arthur Andersen in the University Savings Case in Houston.

Washington D.C. insiders suspect that Kendall is working closely with a team of attorneys as the FBI probe reportedly wraps ups. FBI director James Comey has kept the details of what their probe entails — and if Clinton is even a target — under close wraps. In fact, agents working the case have reportedly been told they will be polygraphed from time to time to avoid leaks. If charges are even recommended by the FBI, U.S. Attorney General Loretta Lynch would also need to sign off on them. Kendall clearly is well aware this case has implications far beyond the legal matter at hand. He is certainly no novice at waging legal warfare for the Clintons, and this case will  prove no exception.