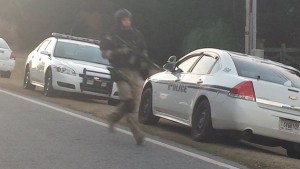 A father holds his son hostage inside his home in Gwinnett County, GA. Police are trying to get them out safely, but the stand-off is ongoing.

It began last night when the suspect went berserk in a domestic incident. A teenager called 911 from another location at about 10pm Tuesday, saying his mother and others were being held hostage.

“The caller reported that an Asian male was at this location threatening to shoot everyone at the home and then commit suicide,” Gwinnett police Corporal Deon Washington said.

The suspect eventually released everyone except his 2-year-old son. We cannot say “yikes” enough.

No one was reported injured as of 11am Wednesday.

Gwinnett Police locked down the neighborhood so tight school buses weren’t allowed through. SWAT teams have gone through at least one shift, with fresh guys coming in before 8am Wednesday.

Also on-site in case things get hairier: a medical helicopter ready to fly to Atlanta, and a bomb squad.

[image via Twitter, Marc Teichner of Fox 5 in Atlanta]

Update—9:41 AM, 01/07/2016
In a statement released 9pm Wednesday, the Gwinnett County Sheriff’s Office announced the death of the 2-year-old, Phillip Nguyen, by a gunshot wound inflicted by his father, Thy Ho. The killer also died from an apparently self-inflicted gunshot wound.

“These terrible events are a sobering reminder of the very real dangers of domestic violence. If you or someone you know is at risk, there is help available,” the press release states. The Sheriff’s Office recommends calling the National Domestic Violence Hotline at 1-800-799-7233 or visiting the hotline’s website.