Court Backs Ruling That Man Give Fingerprint to Unlock Phone 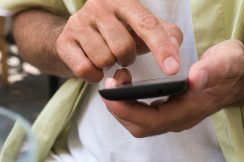 MINNEAPOLIS (AP) — The Minnesota Court of Appeals ruled Tuesday that a judge’s ruling requiring a man to provide a fingerprint to unlock a cellphone was constitutional.

The decision comes in the case of Matthew Diamond, who wanted his burglary and theft convictions overturned in connection with a 2014 robbery in Chaska.

Diamond’s attorney argued that the district court violated Diamond’s Fifth Amendment right against self-incrimination by ordering him to provide his fingerprint to access information on his phone. Police found incriminating evidence on the cellphone after it was unlocked.

“By being ordered to produce his fingerprint … Diamond was not required to disclose any knowledge he might have or to speak his guilt,” the appeals court found.

“Instead, the task that Diamond was compelled to perform — to provide his fingerprint — is no more testimonial than furnishing a blood sample, providing handwriting or voice exemplars, standing in a lineup, or wearing particular clothing,” the judges ruled.