1 Wounded in School Shooting, ‘Could Have Been Much Worse’ | Law & Crime

1 Wounded in School Shooting, ‘Could Have Been Much Worse’ 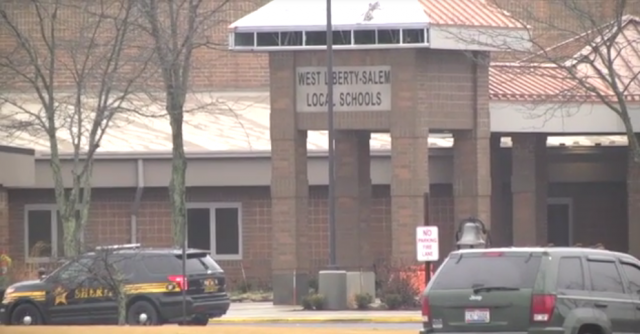 WEST LIBERTY, Ohio (AP) — A school shooting that left one student hospitalized and others scrambling out classroom windows could have been far worse if not for the heroics of staff members who stopped the shooter and had him pinned down when police arrived, authorities said.

The shooter, a 17-year-old senior, used a shotgun and intended to harm more than the student who was hit, Champaign County Sheriff Matthew Melvin said.

The shooter was in custody facing a preliminary charge of felonious assault, with an initial hearing scheduled Monday, authorities said.

“As tragic as this situation is, we are very, very fortunate,” prosecutor Kevin Talebi said. “It could have been much worse. I’m very, very thankful that, as bad as it is, it didn’t escalate to a much more tragic incident.”

Authorities identified the victim as 16-year-old junior Logan Cole, who was hospitalized in Columbus in critical condition. He was a random victim, the sheriff said.

The West Liberty High School shooting, in a common hallway, was reported Friday morning just as classes were getting underway at the school complex, which is surrounded by farm fields 45 miles northwest of Columbus.

“He’s a great student and a real positive person to have in our school system,” Hissong said. “Our hearts are out with his family right now and with him as he’s trying to recover from this.”

The shooter had no significant disciplinary issues, Hissong said.

Cole’s family asked for prayers for him and for the shooter and his family.

“We are certain they have been deeply hurt as well,” Cole’s family said in a statement. “We are confident that God has a purpose and plan through this tragedy.”

Senior Ashley Rabenstein said she was in class down the hall at the time. When students first heard an odd noise, they weren’t sure what it might be because construction has been occurring at the property, she said.

She said her teacher checked the hallway, then ran back and said there was a shooter and threw desks against the door to block it. Students fled through the windows and ran through a cornfield to regroup at nearby houses, Rabenstein said.

“Especially in … such a small town like this, where you pretty much know everyone who lives in the town, you just never think that stuff like this is going to happen,” she said.

Hissong said teachers and students followed their emergency training, barricading doors and then fleeing if possible.

The district evacuated the school three or four school buses at a time over several hours, loading up students and taking them to a park in nearby West Liberty, where they were met by families.

Parent Emily Thornburg was waiting there for her daughter, a fourth-grader. She said the community was very “tight-knit” and everyone was rallying to help each other.

Thornburg, who works at a candy store, described how she felt when she heard about the shooting.

“I just thought about how scared my kids probably were and that I couldn’t be there to grab them,” Thornburg said.

School activities were cancelled through the weekend, and administrators were deciding whether classes would resume Monday.

Article written by Andrew Welsh-Huggins, Associated Press. Associated Press writer Kantele Franko contributed to this report from Columbus. Find Welsh-Huggins on Twitter at https://twitter.com/awhcolumbus. His work can be found at http://bigstory.ap.org/content/andrew-welsh-huggins.