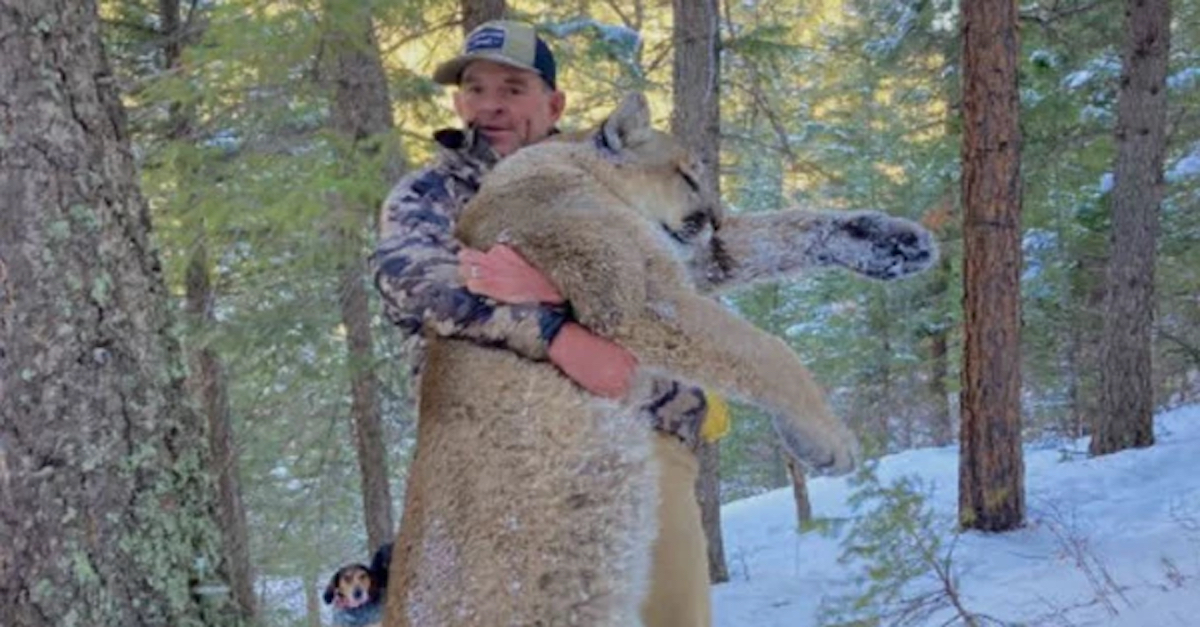 A federal judge in Washington, D.C. on Monday ordered a Colorado man accused of assaulting a police officer during the Jan. 6 siege at the U.S. Capitol to be placed under house for violating the provision of his pretrial release requiring that he not possess any illegal firearms. The move came after prosecutors discovered that the defendant used a .357 magnum to kill a massive mountain lion last month.

Court documents filed by prosecutors last week contained a photograph of a beaming Patrick Montgomery, 41, holding up the carcass of a 170-pound mountain lion that he shot on March 31. The photo was reported by officers with Colorado Parks and Wildlife (CPW), which probed the incident and discovered that Montgomery in 1996 was convicted in New Mexico on three counts of Robbery, each a third-degree felony, for robbing several stores. As a convicted felon, it is illegal for him to possess a firearm of any kind.

Possessing an illegal firearm wasn’t the only pretrial release stipulation that Montgomery allegedly violated since participating in the Capitol riot that led to him being indicted by a grand jury in D.C. on a 10-count indictment for assaulting a Metropolitan Police Department officer, engaging in physical violence, illegally entering the Capitol and Senate Gallery, obstructing an official proceeding, and disorderly and disruptive conduct.

The court also ordered Montgomery to “not violate federal, state, or local law while on release” and prohibited him from committing “any Federal or State crimes.” According to prosecutors, Montgomery did just that a few weeks after the Capitol siege when “he and his dogs pursued the bobcat for approximately 11 miles and his dogs killed the bobcat, which violates local law.” The report from CPW said that Montgomery had knocked the bobcat out of a tree with a slingshot before letting his dogs kill the animal, both of which are illegal in the state of Colorado.

The CPW report further stated that Montgomery provided “conflicting stories” when questioned about the bobcat’s death before threatening to “press charges against the State of Colorado for taking his income.”

“Given that Montgomery has repeatedly and flagrantly violated both state and federal law while on pre-trial release in this case—including by possessing and using a firearm—the Government respectfully requests that the Court revoke his release pending trial,” prosecutors wrote in a brief to the court last week. “Montgomery has no respect for the Court’s orders, just like he had no respect for law enforcement at the Capitol on January 6. Instead of peacefully protesting, he tried to grab a Metropolitan Police Department officer’s baton, wrestled him to the ground for it, and then kicked the officer in the chest while wearing a boot. After the officer regained control of his baton, Montgomery stood up, and held up his two middle fingers at the officer.”

While U.S. District Judge Randolph D. Moss did not revoke Montgomery’s release entirely, Monday’s order requires that he be “restricted to 24-hour-a-day lock-down” at his residence with exceptions for medical necessities, court appearances, and court-approved activities.

Moss also said that Montgomery “shall not participate in any hunting-related activities, either personally or professionally,” and ordered “all firearms and/or weapons to including hunting knives shall be removed from the home.”

Read the court documents below.

Montgomery Brief by Law&Crime on Scribd

Montgomery Order by Law&Crime on Scribd