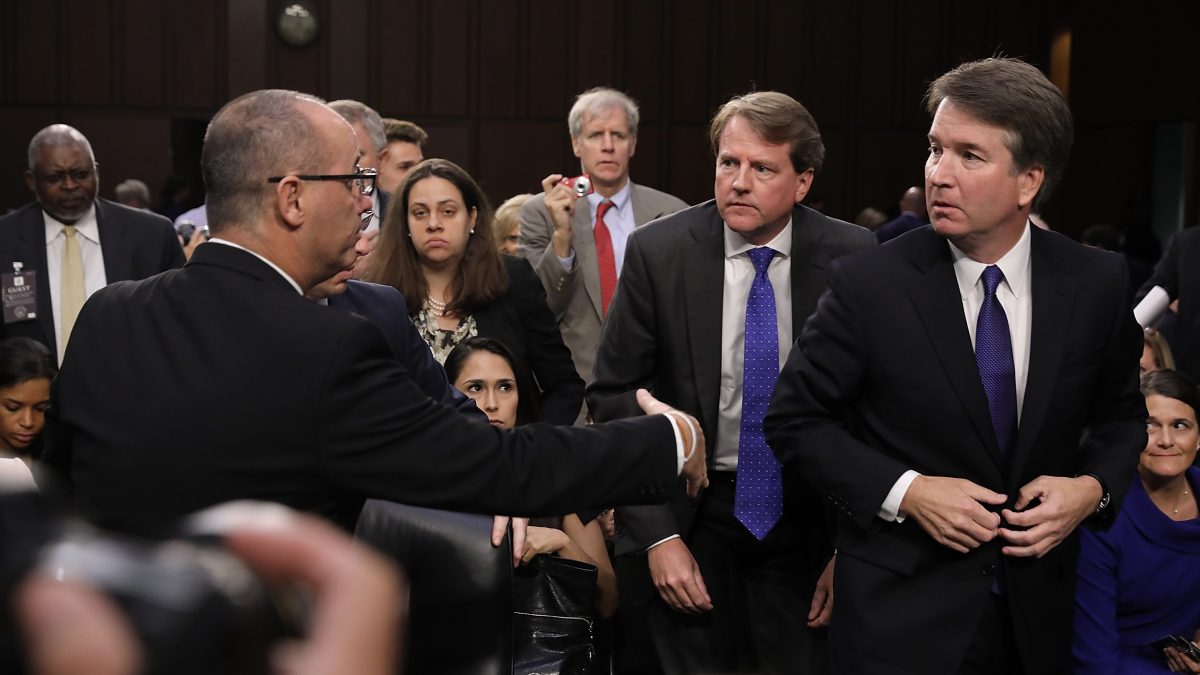 Wow, here's Kavanaugh giving @fred_guttenberg a contemptuous look before turning his back on him. Guttenberg's daughter was killed in the Parkland gun massacre pic.twitter.com/Fz9e0gwytv

At the end of a crazy Tuesday morning session of Brett Kavanaugh confirmation hearings on Capitol Hill, there was an encounter that is making waves on the internet.

Kavanaugh, President Donald Trump‘s Supreme Court nominee, was all smiles as he got up from his seat for a break. He’d been sitting there for hours jotting down notes on a pad as Republicans and Democrats went back and forth with their talking points. It was then that Fred Guttenberg, the father of Jaime Guttenberg, one of the victims of the mass shooting in Parkland, Florida last Valentine’s Day, approached Kavanaugh from behind and attempted to shake his hand.

Kavanaugh turned around and then turned away. Guttenberg tweeted about this afterwards.

Just walked up to Judge Kavanaugh as morning session ended. Put out my hand to introduce myself as Jaime Guttenberg's dad. He pulled his hand back, turned his back to me and walked away. I guess he did not want to deal with the reality of gun violence.

“Just walked up to Judge Kavanaugh as morning session ended. Put out my hand to introduce myself as Jaime Guttenberg’s dad,” he said. “He pulled his hand back, turned his back to me and walked away. I guess he did not want to deal with the reality of gun violence.”

On Monday, Guttenberg announced that he would attend the hearings and said that he “hope[d] to play a role in ensuring that this man does not become the next Supreme Court Justice.”

I will be at Kavanaugh hearings and I hope to play a role in ensuring that this man does not become the next Supreme Court Justice. https://t.co/6oC7OPlyB8

The media had a front row seat to the non-exchange and recorded it for posterity.

Fred Guttenberg, the father of Jamie Guttenberg who was killed in the shooting in Parkland, Fla., left, tries to shake hands with @realDonaldTrump's Supreme Court nom., Brett Kavanaugh, right, during a lunch break. Kavanaugh did not shake his hand. (AP Photo/Andrew Harnik) @ap pic.twitter.com/smcCGuLT6X

This moment is resulting in a mixed bag of response. While some suggested it was an inappropriate approach, many others said it is evidence Kavanaugh is as heartless as Democrat lawmakers claim.

This is silly. Sorry, I'm on your side, but it is not appropriate for a member of the audience to approach the nominee like that in a hearing. I don't blame Kavanagh for walking away. Save your outrage for things that matter.

Kavanaaugh’s behavior was arrogant and rude.

He went from smiles to straight cold blooded facial expression to a father who lost his daughter. This man like the rest of the gop are pure evil sob's!

Correction. We are in a republic. There is nothing liberal about a democracy. And yes, it’s bad form to approach. Just because you “can” doesn’t mean you “should.” #LearnTheDifferences

Some went so far as to say “this is who Brett Kavanaugh is” and that “this is the defining image of the day.”

This is the defining image of the day.

Brett Kavanaugh sneers at a man (Fred Guttenberg) who lost his daughter (Jamie Guttenberg) in the Parkland school shooting.

This is who Brett Kavanaugh is. pic.twitter.com/eti5ovjRfn