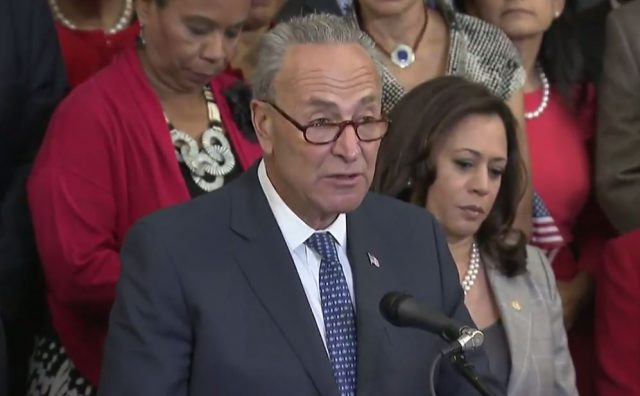 Marvin Quattlebaum, a South Carolina attorney and current partner a Nelson Mullins Riley & Scarborough LLP, was confirmed on Thursday to become a federal judge by a vote of 69-29. One of those 29 who voted against him was Senate Minority Leader Chuck Schumer (D-New York), who apparently didn’t think a white person was the way to go.

“It is long past time that the judiciary starts looking a lot more like the America it represents,” Schumer said, claiming that Quattlebaum’s nomination “speaks to the overall lack of diversity in President Trump’s selections for the federal judiciary.”

The spot that Quattlebaum takes had been vacant for a while, after two black nominees were rejected for not getting the “blue slip” from South Carolina’s Senators. It is Senate tradition not to confirm nominees who don’t receive approval from both of the Senators from their home state.

One of those South Carolina Senators, Republican Tim Scott, is the GOP’s only current black Senator, and he took issue with Schumer’s reasoning.

“Perhaps Senate Democrats should be more worried about the lack of diversity on their own staffs than attacking an extremely well-qualified judicial nominee from the great state of South Carolina,” Scott said in a tweet.

The state’s other Senator, Republican Lindsey Graham, said in his own tweets, “I judge nominees on the content of their character, not the color of their skin,” and, “this was an absolutely shameful reason to vote against a very qualified nominee.”

Rep. Trey Gowdy (R-South Carolina), discussed the black nominees who did not get approval, explaining on Twitter that the reason why one of those nominees was not approved was because of a “significant bond issue.” He added that the other went on to become Chief Justice of the South Carolina Supreme Court.

I hate to interrupt Senator Schumer with facts. But one nominee was withdrawn because of a significant bond issue, while the other became the Chief Justice of the South Carolina Supreme Court.https://t.co/Hoj9e1xWhs

In subsequent tweets, Gowdy said that Quattlebaum was “uniquely well-qualified” and that “Hopefully Senator Schumer can find a way to look at really unusual factors (like qualifications) in the future.” Gowdy also noted that in the past, Schumer didn’t have a problem with another recent white Trump nominee from South Carolina.