Judge Ranted About ‘Queers’ with AIDS During College 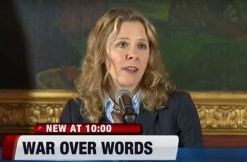 A Wisconsin Supreme Court Justice who faces an election just learned that you can never, ever get away from mistakes you made in college. As revealed by the liberal group One Wisconsin Now, Rebecca Bradley did a bit of writing for the Marquette Tribune, a campus newspaper at Marquette University, in 1992. Here is a sampling:

“And no matter how much you petition the public about using condoms, those at risk—homosexuals, drug users and promiscuous homosexuals—are not exactly the responsible types who will heed your warning anyway, as evidenced by the irresponsible and immoral behavior in the first place,” she wrote in a February 1992 op-ed criticizing a new Gay, Lesbian and Bisexual group on campus.

Ladies and gentlemen, we repeat: She’s up for reelection on April 5. If she wins, she’ll serve another 10 years in her current position after getting appointed by Gov. Scott Walker. This recent development isn’t going to help her, though.

One point in her article is that gay people basically commit suicide and murder by getting AIDS. As she put it in another February 1992 editorial, “Heterosexual sex is very healthy in a loving martial relationship. Homosexual sex, however, kills.”

The best/worst part is her response to Bill Clinton getting elected to the U.S. presidency in November 1992. She called him a “tree-hugging, baby-killing, pot-smoking, flag-burning, queer-loving, draft-dodging, bull-spouting ’60s radical socialist adulterer.” [Emphasis ours.]

And she really wouldn’t let up with the AIDS. Even the Clinton op-ed was peppered with references, calling it a “politically correct disease,” getting in the way of funding cancer treatments.

Critics of course are saying this should sink her election bid.

“As a gay man and long-term survivor living with HIV, Rebecca Bradley’s hateful diatribes against people like me while at Marquette are shocking and deeply disturbing,” Scott Foval told One Wisconsin Now. “I question how anyone in the LGBTQ community, or anyone living with HIV/AIDS feels they could get a fair decision from her.”

Bradley recent apologized for the articles.

Gov. Walker’s office is backing her for now.

“Justice Bradley appropriate made it clear today that a column written in college does not reflect her view as a Supreme Court Justice, a court of appeals judge, a circuit court judge or as an attorney,” Walker said in a statement.