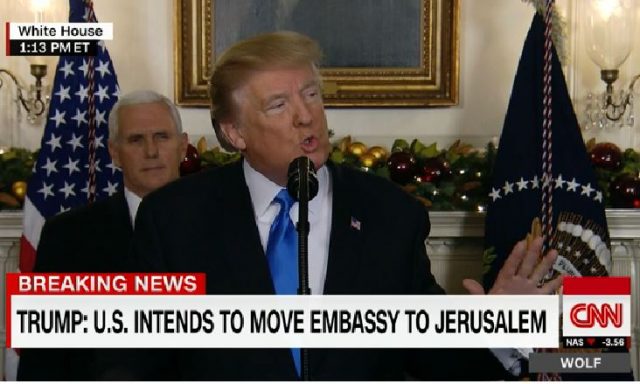 Wednesday afternoon, President Donald Trump made a declaration that he is recognizing Jerusalem as the capital of Israel, and that the United States should move its embassy there from Tel Aviv. The statement drew criticism before it was even made, out of fear that it would ruffle feathers in the Middle East, but while Trump may be the first president to say this while in office, Congress beat him to it by more than 20 years.

Other presidents, including Bill Clinton and George W. Bush, campaigned with promises to move the embassy to Jerusalem, but never followed through once in office. This is because the Jerusalem Embassy Act has a provision that allows the president to delay the process by six months by signing a waiver, should they provide evidence of a threat to national security. Every six months since the law went into effect, presidents have signed such a waiver.

President Trump is also expected to sign the waiver this time around, but his stated intention is to get the ball rolling on moving the embassy in the near future.

It’s unclear exactly what specific national security threats may exist if the U.S. moves the embassy, but the controversy is based on the belief that such a pro-Israel move would create an imbalance in peace negotiations between Israel and the Palestinian Authority. While Israel currently controls Jerusalem, the city’s final status remains to be set by a lasting peace agreement, which has yet to be worked out. Palestinians would like to see a capital of their own in Jerusalem, and the possibility of East Jerusalem being part of a future Palestinian state has long been discussed, including in past offers made by Israel.

Hamas, a designated terrorist organization that gained control of the Gaza Strip soon after Israel withdrew from the territory in 2005, declared a “day of rage” before Trump even delivered his speech. Turkey, Saudi Arabia, and France all warned that moving the embassy could cause problems. Still, the justification for the outrage appears questionable, because declaring Jerusalem to be Israel’s capital does not preclude a Palestinian capital from being there too. Any discussed two-state solution to the Israeli-Palestinian conflict, even those that were most generous to the Palestinians, has Israel maintaining at least partial control of Jerusalem. Even if a Palestinian capital were to be established in East Jerusalem, the Israeli government would remain where it is.

Trump’s statement on Wednesday did nothing to threaten the struggling peace process. “This is nothing more, or less, than a recognition of reality,” Trump said. The president has gone on record saying that he’s in favor of brokering a two-state solution, if both sides could agree to one.

Opponents and supporters of the decision would likely agree that it’s symbolic in nature, because everyone is aware of the reality on the ground. To some, such a superficial gesture isn’t worth the potential backlash and violence that could erupt in response. On the other hand, the failure of past presidents to make such a gesture out of some sense of fear spoke volumes to those waiting for such a “recognition of reality.”