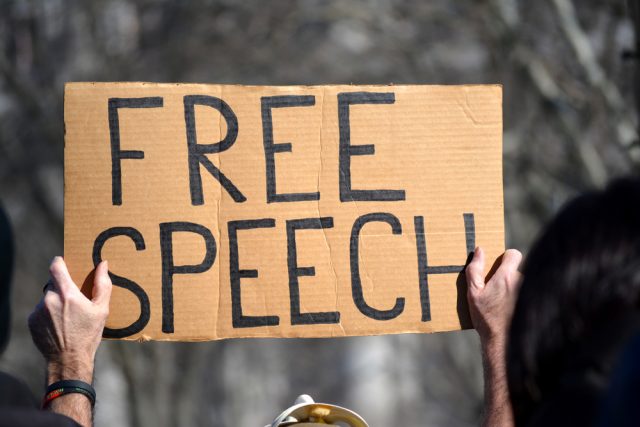 New York University’s Professor Ulrich Baer, who teaches a number of subjects including Comparative Literature, had strong words for college students who have recently rushed to restrict speech on campuses. He’s all for it! In a New York Times op-ed, Baer said that efforts to restrict certain types of speech “should be understood as an attempt to ensure the conditions of free speech for a greater group of people, rather than censorship.” So limiting speech is really protecting speech? Well, then.

Baer’s argument focuses on the notion that certain types of speech are geared to dehumanize certain segments of the population, and therefore takes away their power to participate in discussions. “When those views invalidate the humanity of some people, they restrict speech as a public good,” he says. By demeaning people as a group, the argument goes, it devalues their voices, which ultimately has a negative impact on speech in general. “In such cases there is no inherent value to be gained from debating,” Baer says. It’s a well-intentioned argument that is geared towards making sure everyone is empowered. It’s also incredibly misguided.

First of all, who gets to determine if speech is so blatantly offensive that discussion has “no inherent value,” or just one side’s point of view that others dislike? When it comes to campuses, I would imagine that would be school officials. So in the cases of public institutions, you’d have government officials censoring speech on public property. That’s a big deal, and it raises significant constitutional issues, in that it’s totally unconstitutional.

Second, the idea that we need the government to protect us from offensive words shows a severe lack of faith in our society. A paternalistic approach to free speech shows zero confidence that people can 1) evaluate the validity of statements, and 2) respond to statements with which they disagree.

Third, in a free society, speech that is offensive to a particular group of people can provide a valuable opportunity for the offended party to have their voice heard, and for them to strengthen their own arguments. This is especially critical on campuses, where young adults may be first encountering beliefs that oppose their own. Learning how to counter those beliefs is a skill that could serve them throughout their lives, and strengthen their own personal identities.

Baer illustrates his argument by discussing the Holocaust and those who deny it, a fitting subject given that today is Yom HaShoah, the Jewish day of remembrance of the Holocaust. He points to Holocaust deniers as challenging survivors “to produce evidence of their own legitimacy.” As a Jew, I certainly agree that denying the Holocaust is reprehensible, especially when there are fewer remaining survivors who can give first-hand accounts of what happened. The best way to combat this, however, is not to silence the deniers, but to educate everyone else so that they will dismiss denial as the absurdity that it is. Freedom of speech allows us to do this.

Freedom is freedom. We don’t get to determine who is allowed to say what, and we don’t get to censor words just because we don’t like them. Protecting speech that we find abhorrent ensures that when we have something to say, we can be heard. The fact that an English professor doesn’t appreciate that is disappointing.