Did These Servicemen Really Break the Law to Honor Trump on Memorial Day? 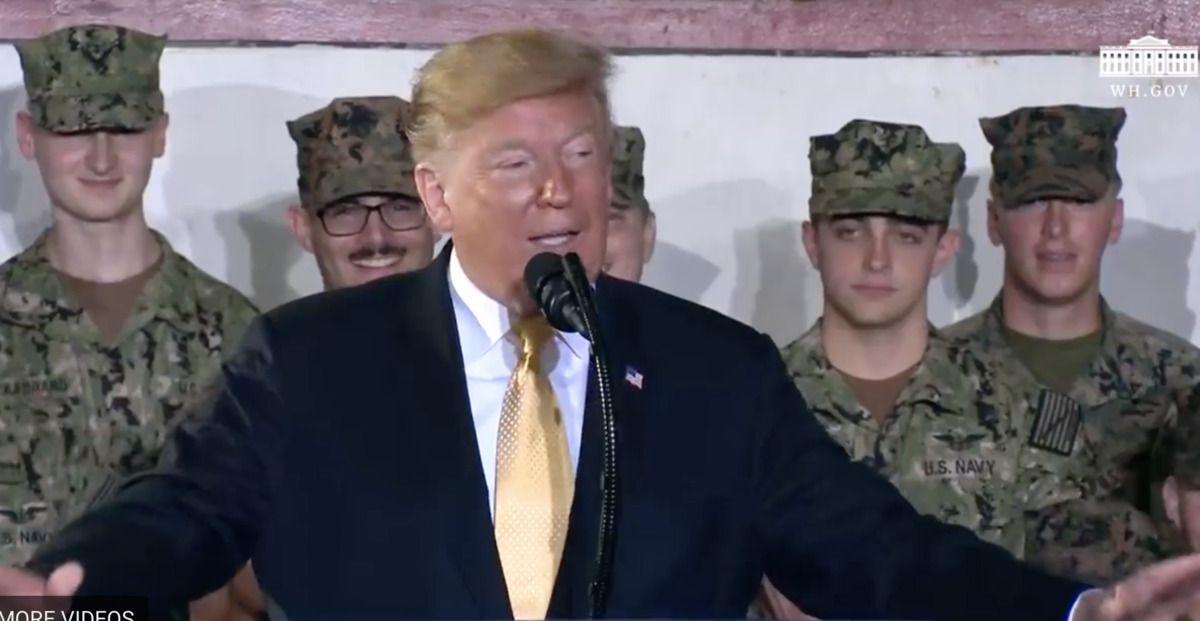 This Memorial Day was chock full of cringeworthy moments, courtesy of President Donald Trump. First, Trump visited Japanese military forces aboard the J.S. Kaga, and wished them a “happy Memorial Day,” which seems a little awkward, especially standing alongside the Japanese Prime Minister. Then, Trump met with service members aboard the USS Wasp in Yokosuka, where he criticized the ship’s design.

Airmen onboard the USS WASP wearing patches on their jumpsuits that read “Make Aircrew Great Again.” The patches include an image in the center in the likeness of President Trump. pic.twitter.com/rQKAyrcDte

Some of the sailors aboard the WASP where Trump is now speaking are wearing this patch pic.twitter.com/07LZojqnYH

There’s just one problem –the photo shows the airmen wearing patches displaying Trump’s face, along with the slogan, “Make Aircrew Great Again.”  It’s against the rules.

Navy spokesman Samuel Boyle told CBS News, “Navy leadership is currently reviewing this instance to ensure that the wearing of the patch does not violate DoD policy or regulations.”

Allow me to help Mr. Boyle out: it does violate those regulations. The Pentagon has strict rules prohibiting soldiers from public display of political preferences.  Here’s the relevant portion of the directive:

Service members can, of course, still vote, speak freely, sign petitions, write editorials, contribute to campaigns, display bumper stickers, and all that – as long as those things are done in their personal capacity. Federal guidelines aren’t in place to stop military personnel from participating in politics in government – they’re there to ensure that the U.S. armed forces themselves remain non-partisan. After all, servicemen and women are obligated to obey the commander-in-chief regardless of the individual or political party occupying the office.

The distinction that matters is one of public v. private action.  Those on “active duty” represent our military in an official capacity. Those who are employed full-time by the military, onboard a military ship, in military uniform are definitely on “active duty.” The play on Trump’s “Make America Great Again” slogan is, just as clearly, a partisan political statement.

MAGA is not a casual term, a Morale patch, it is a distinct partisan theme, Trump’s major theme get it, MAGA hats? That is not a morale patch it is a partisan political statement. It is highly offensive to those who oppose Trump, and therefore it creates division within a unit.

They’re patriots for serving honorably in US armed forces. That doesn’t change the fact that it’s dumb to have such a patch. They don’t serve Trump, they serve the United States.

This isn’t the first time we’ve seen these Trump patches on service personnel, either.  In September 2017, the Department of Defense posted a picture of an airman, also in official military clothing, sporting the “Make Aircrew Great Again” Trump patch. We’ll have to wait and see whether any official reprimand will be issued over the patches. Meanwhile, one Twitter user had a suggestion for those violating D0D policy:

Maybe their defense will be that the guy on the patch looks nothing like Trump.