President Donald Trump has railed against information leaks to the media that have led to a variety of stories about the inner workings of his administration, as well as the Russia investigation. He has referred to such leaks as illegal, as they occasionally deal with sensitive government material. Of course, while POTUS gets mad when stories based on these leaks from unnamed sources appear in “fake news” outlets like CNN, The New York Times, or The Washington Post, he went out of his way to retweet one by his cable network of choice, Fox News. 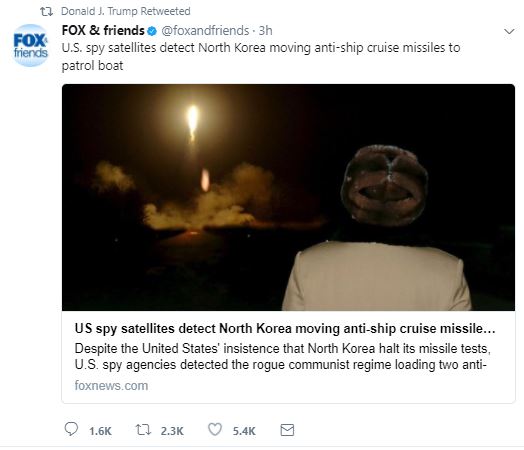 The story that President Trump retweeted is about North Korea missile testing, and cites “U.S. officials with knowledge of the latest intelligence in the region.” One quote was even attributed to “one official who requested anonymity to discuss sensitive information. ”

If that doesn’t sounds like a leak of classified information from unnamed sources, I don’t know what does.

So why the double standard, Mr. President? It’s okay for Fox News to use leaks, but if anyone else does it, we need to make a federal case out of it? Are you going to hunt down the leakers behind the story and prosecute them?

If anything, Trump’s retweet proves a point: leaks from unnamed sources are how media outlets get some of their biggest stories, regardless of what they’re about. A report on North Korean missile testing is of high importance, and Fox News was right to publish it, just as President Trump was right to share it. But stories on what goes on behind the scenes at the White House are newsworthy too, especially when the administration limits its communications with the press the way this one does.

The real double standard, of course, isn’t so much about who’s doing the reporting, although Trump likely would not have shared a similar story if it came from CNN. The real difference is that this leak wasn’t about him.