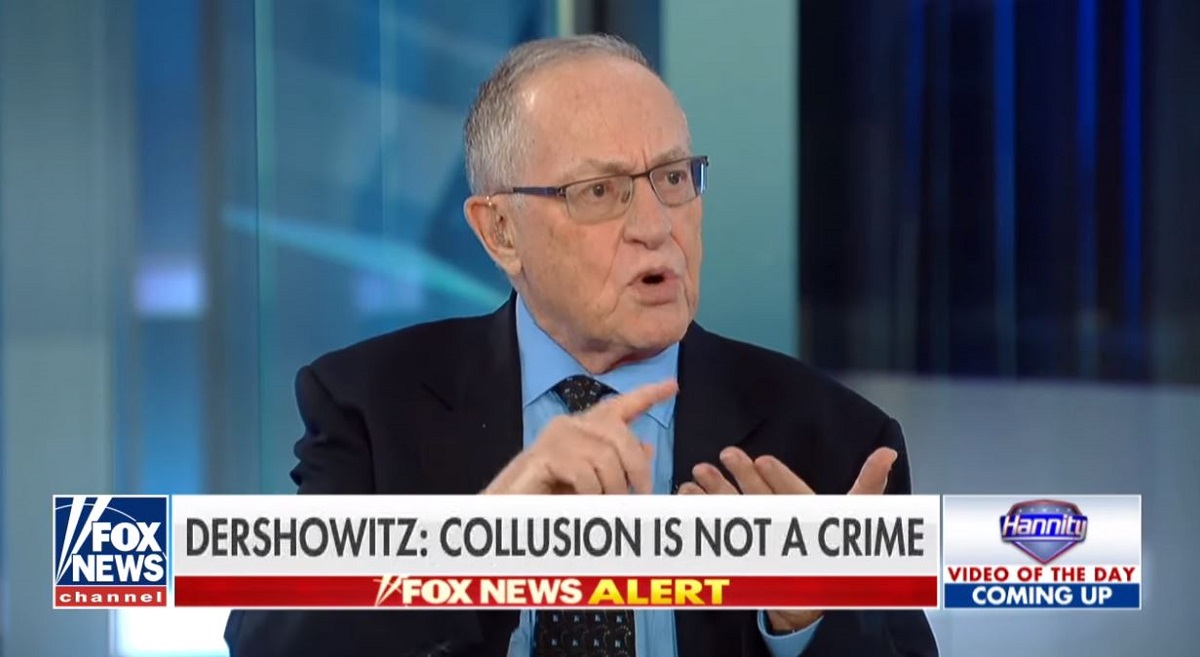 Alan Dershowitz is a famous attorney. He has written loads of books (that he promotes quite vociferously) and always seems to have Harvard Law School mentioned in his introduction. Now, he’s upset that his friends in Martha’s Vineyard won’t talk to him.

Dershowitz is often described as the “liberal” professor by those on the right seeking to boost his credibility as a shameless Trump-booster, while many on the left have, well, come to ignore him.

But the confusion about Dershowitz’s political bent doesn’t stem from an even-handed approach to legal analysis. Nope. Not even close to being kinda close. A deep dive into his public persona indicates, rather, a desire to simply make outrageous claims in order to bring attention to himself.

What follows is a survey of Alan Dershowitz’s varying opinions and postures through the years. For brevity and efficiency’s sake, here are Alan Dershowitz’s Greatest Hits Collection OR The Dersh’s Top Eight Exercises of Logic and Cant:

1. Mueller vs. Mueller?
Alan Dershowitz really hates Robert Mueller. In 2017, Dershowitz told Fox News that Mueller was a “zealot” whose goal was to charge Trump with a crime.

Fast forward just a few seconds on your digital memory apparatus. Now, Robert Mueller’s goal is to write a report for Congress.

2. Understanding how the Constitution works
During a 1999 Q&A for the Washington Post, Dershowitz fielded a reader’s question about his theory of “sexual McCarthyism”–a phrase coined to scorn Ken Starr‘s investigation of the Monica Lewinsky affair. Dershowitz hit the nail on the head by drawing a distinction between government power (and abuse of said power to ruin private lives over sexual exploits) and private power doing the same (something Larry Flynt has long practiced.) Dershowitz noted, “it is an exercise of his First Amendment rights. Larry Flynt is a private citizen, and the damage that he can cause is far less than the damage that can be caused by government officials using the power of government to pry into private lives.”

Then some time passed. Seth Rogen got famous. As did James Franco. Kim Jong-il passed on and Kim Jong-un took up his father’s mantle. Rogen and Franco made a movie glorifying an illegal CIA assassination plot wherein Kim dies. Sony pulled the plug at the last minute. No government action. Just a business decision because very few theaters wanted to run the film. So, of course, Alan Dershowitz responded in measured tones and said, “This is Pearl Harbor on the First Amendment.”

3. Academic freedom
In 2015, after joining the ranks of those who pretend not to understand the concept of free speech and the First Amendment, Dershowitz took a lengthy shot at the relatively small number of student protestors who have embraced antifascist tactics like de-platforming race scientists and white nationalists. Dershowitz said, “It is free speech for me, but not for thee. Universities should not tolerate this kind of hypocrisy, double standard…If you’re going to be a college administrator or a professor, if you have tenure, you have to speak back to the students, you have to call these things what they are: double standards, hypocrisy, bigotry, McCarthyism, and the fog of fascism is descending quickly over many American universities.”

The problem here is that this is a complete 180-degree turn for Dershowitz. In September 2006, Dershowitz launched a high-profile, highly-controversial, and ultimately successful campaign to deny tenure to DePaul University professor Norman Finkelstein. Finkelstein and Dershowitz are bitter enemies and largely disagree on scholarship methods and the Israel-Palestine issue. Dershowitz accused Finkelstein of lying about him after Finkelstein accused Dershowitz of plagiarism. Dershowitz’s role was roundly denounced, but he came out on top. Finkelstein left DePaul after being denied tenure–speech squelched and livelihood destroyed.

4. Israel and Palestine
During a semi-related turn of events in 2013, Dershowitz subjected Brooklyn College to his voluble rage over a pro-Palestinian event held by students there. The problem, Dershowitz claimed, wasn’t the event itself, but that it was being “endorsed” and “co-sponsor[ed]” by the school’s political science department. Dershowitz said he opposed, “one sided political events that are not academic in nature,” and that he would “oppose a pro-Israel event being sponsored by a department.”

Except for a couple of things: what Alan Dershowitz did the year before that. In 2012, the University of Pennsylvania co-hosted an event with self-identified “pro-Israel” students titled, “Why Israel Matters to You, Me and Penn: A Conversation with Alan Dershowitz.” As for Dershowitz’s claim that Brooklyn College endorsed the pro-Palestinian event in 2013? That actually never happened.

5. Censorship for thee, too
Here’s a fun one. Reacting again to the conservative movement media line on Free Speech, the First Amendment and college campuses, Dershowitz went so far as to accuse anti-fascist and anti-racist protesters of practicing “censorship,” according to a September 2017 article from Fox Business.

Then it was March 2018. The Forward ran a lengthy article about a censored documentary produced by Al Jazeera regarding the influence of foreign lobbies. As it turns out, Alan Dershowitz was apparently flown to Qatar (where Al Jazeera is based) to lobby against the release of said film. Dershowitz later claimed he would never try to censor a film–while simultaneously attempting to dictate said film’s contents to the journalist who helmed the project.

6. Presidential Trust
Dershowitz famously made a habit of hating just about everything about Barack Obama. He even once claimed superior knowledge of the 44th president’s own thought processes. In comments to the Forward, Dershowitz said, “What if I can prove to you, and I think I can, that President Obama was not motivated by what was good for America or what was good for world peace?”

Donald Trump, on the other hand, is apparently acting with those high-minded ideals in mind. Recently, Dershowitz again claimed superior knowledge, telling Fox News, “He must respond. I think he will respond. He won’t make the tragic mistake that President Obama–for whom I voted–made. That is, creating a red line, then violating it–essentially inviting the Russians and the Iranians to come in by creating a vacuum…I think this president will stand strong against that.” Really, though, Dershowitz has and had no superior knowledge–just his own red line that he used to criticize Obama–which will allow him to fawn over Trump for as long as Trump adheres to it.

7. Terrorism
On one hand, Alan Dershowitz thinks terrorism is pretty bad. He even once dismissed out-of-hand the suggestion that there’s any reason to hone in on root causes of terrorism. On Fox & Friends, he said, “You hear people try to be sympathetic to terrorists, saying they grew up poor, they had no opportunity. That is bogus. A lot of terrorists have had good educations, were wealthy, had every opportunity, they’ve been welcomed to countries like Great Britain and the U.S., they’ve been educated.” The point here: no political or social conditions have any bearing on terrorism whatsoever; blame terrorists only.

On the other hand, if you’re French, Dershowitz thinks terrorism is your birthright. Arguing with Lawrence O’Donnell–who doesn’t think the French are asking for it–Dershowitz affirmed, “They reward every terrorist. Virtually every terrorist who has been convicted and sent to prison in Paris has either gotten out…[France] voted for Palestinian statehood for a country that was built on terrorism. They have done everything to avoid joining the fight on terrorism. I feel terrible for these people.” The point here: French social and political conditions play right into the hands of terrorists; blame the French.

8. Government power and overreach
A commendable 2008 broadside for the Wall Street Journal torched the legal basis for George W. Bush‘s likely political persecution of Eliot Spitzer (over the victimless crime of purchasing sex.) Dershowitz wrote, “The federal criminal investigation that has led to Eliot Spitzer’s resignation as governor of New York illustrates the great dangers all Americans face from vague and open-ended sex and money-transaction statutes.” The federal government, Dershowitz noted, has simply grown too abusive, enmeshed in finding legal loopholes to go beyond the law and dismissive of legal safeguards–when the “crimes” are money and sex.

An interesting 2014 op-ed in The Boston Globe underscored Dershowitz’s uneasy application of his own logic. On the subject of extra-judicial drone assassinations and targeted killings of suspected terrorists, Dershowitz shrugged as he said adios to feigning concern for due process, “Targeted killing of terrorists is here to stay. Indeed, it is likely to increase in frequency as we fight ISIS and other shadowy terrorist groups. We will not and should not give up the technological advantage accorded us by drones with GPS-guided missiles.” The federal government, Dershowitz contends, can run roughshod over the U.S. Constitution because terrorism.