‘The Cop in Me Wants to Kick My Own Ass’: NYPD Lt. Who Kneeled with Protesters Says He’ll Feel ‘Shamed’ for Life 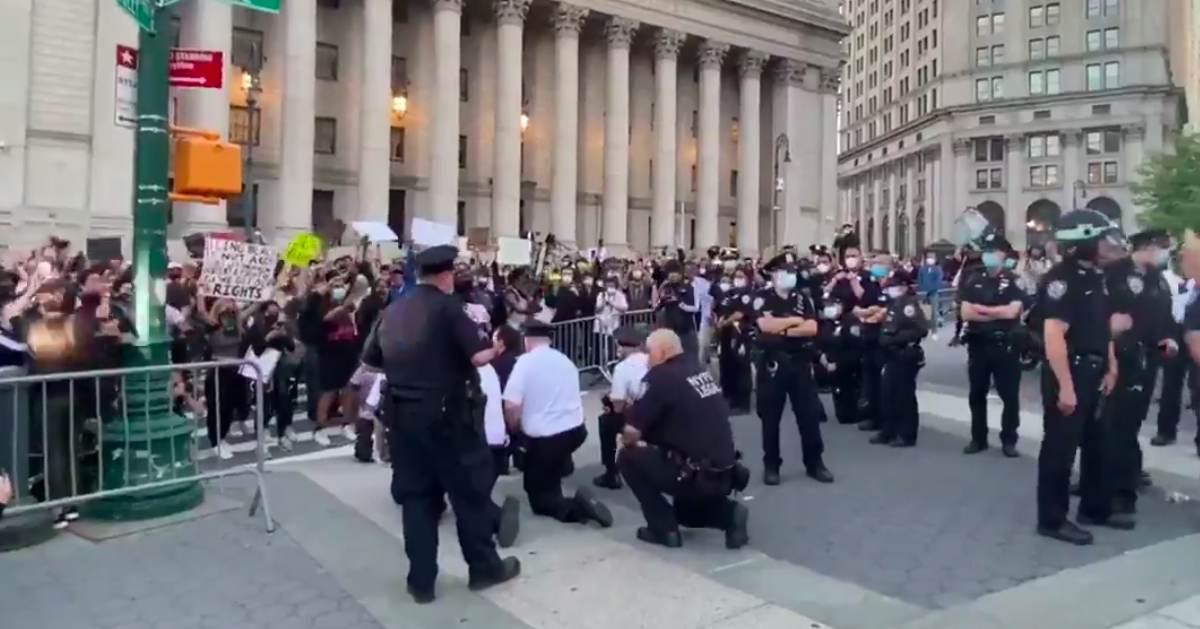 A lieutenant in the New York City Police Department who knelt with protestors demonstrating against police brutality following the police killing of George Floyd  last month sent an email to his colleagues apologizing for his conduct, saying it is something that will haunt him for life, the New York Post reported Thursday.

In a June 3 email to others police officers obtained by the New York Post, Lt. Robert Cattani of the Midtown South Precinct wrote that he regretted his “horrible decision to give into a crowd of protesters’ demands” by taking a knee during demonstrations in Lower Manhattan’s Foley Square. Cattani told his fellow officers that “the cop in me wants to kick my own ass.”

In the email, Cattani couched his decision to kneel as one taken out of fear, confusion, and a desire to de-escalate what appears to be a peaceful protest, as evinced by footage posted to Twitter by Gothamist reporter Jake Offenhartz.

In Foley Square, resounding chants of “NYPD take a knee.” Eventually, four cops kneel to huge chants. “We just want to get home safely, same as you,” says one protester. pic.twitter.com/6eRC4h9L0Q

“The conditions prior to the decision to take a knee were very difficult as we were put center stage with the entire crowd chanting. I know I made the wrong decision. We didn’t know how the protesters would have reacted if we didn’t and were attempting to reduce any extra violence,” Cattani wrote.

The video shows that protestors were chanting, “NYPD, take a knee,” but after Cattani and three other officers obliged they were met with cheers and applause.

In the email, Cattani conflated protesters with rioters.

“I thought maybe that one protester/rioters who saw it would later think twice about fighting or hurting a cop. I was wrong. At least that [sic] what I told myself when we made that bad decision. I know that it was wrong and something I will be shamed and humiliated about for the rest of my life,” he wrote.

“I could not imagine the idea of ever coming back to work and putting on the uniform I so wrongly shamed,” he continued. “However, I decided that was the easy way out for me and I will continue to come to work every day being there for my personnel.”

The day before Cattani wrote his email, Terence Monahan, the highest-ranking uniformed member of the NYPD, also knelt with protestors in Manhattan. After he stood up, he hugged one of the demonstrators.

Highest-ranking uniformed member of the NYPD takes a knee with protesters following the death of George Floyd.

Chief of Department Terence Monahan urged demonstrators to "be safe" as he hugged them. https://t.co/dAKlPisUk6 pic.twitter.com/njjBiVSxEC