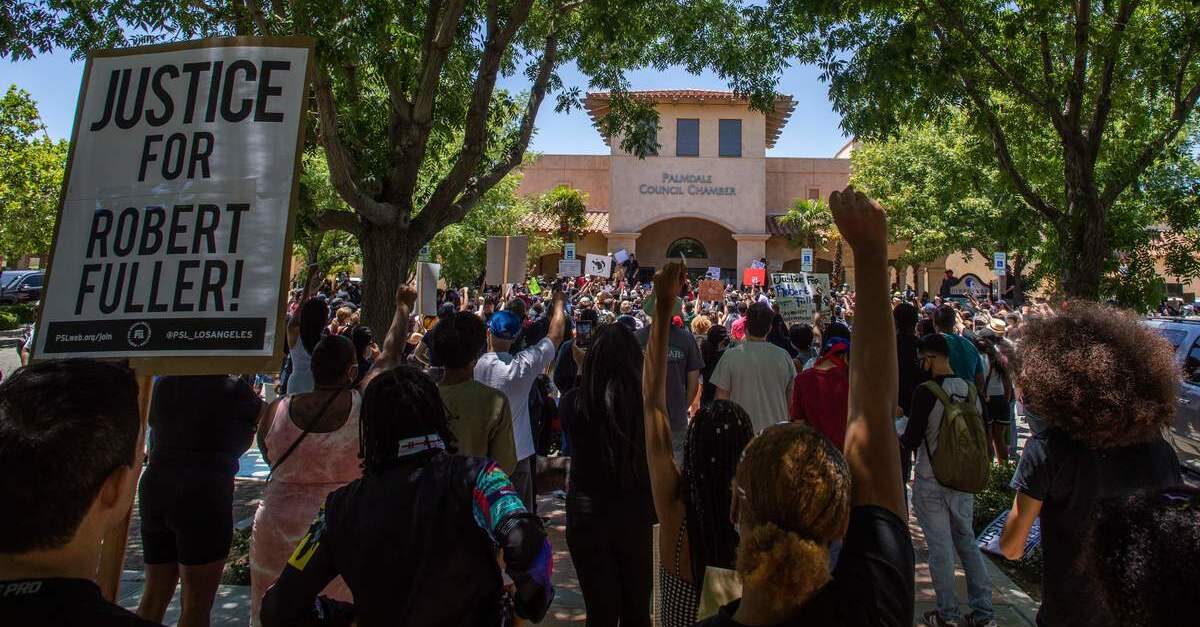 Robert Fuller, a young Black man who was found hanging from a tree in California early last month, died by suicide, according to local police.

Los Angeles County Sheriff Department officials held a press conference on Thursday afternoon providing the official findings of the Los Angeles County Department of Medical Examiner-Coroner into the 24-year-old’s death in downtown Palmdale. The determination—and the delivery thereof by the sheriff—was immediately criticized and met with skepticism.

Commander Chris Marks ran through a list of evidence used to reach the suicide determination in the case.

He noted a lack of physical evidence indicating a struggle and said there was no evidence that Fuller had attempted to remove the rope around his neck. Marks additionally said police found nothing that suggested there was a ladder or chair used to hoist Fuller’s body.

Rather, Marks said, investigators found “linear scars” on Fuller’s left wrist which were found to be “consistent with suicidal attempt.”

Many critics and activists–as well as elected officials in Los Angeles–questioned the official narrative and argued that local cops could not be trusted adequately investigate the incident. Fuller, observers noted, was also the second Black man to be found hanging from a tree within a two-week span in California. Suspicions and aspersions dogged the inquiry from the start.

“This is really crazy to all of us,” Fuller’s sister Diamond Alexander said at a protest calling out the investigation. “We want to find out the truth of what really happened. Everything that they’ve been telling us has not been right.”

Police, however, said this was a suicide.

Marks said that Fuller had been admitted three times over suicidal ideation; once in January 2017 after expressing a desire to put a gun to his head; once in February 2019 after complaining about hearing voices telling him “to kill himself” and again in November 2019.

While many online commenters maintained skepticism over the final determination of the nationally prominent investigation, others took more direct issue with how police officials presented the information.

Asked a question about outspoken distrust of the sheriff’s department and demands for an outside investigation, Los Angeles County Sheriff Alex Villanueva took the opportunity to defend his department’s work and to push back against his critics.

“Well, I can tell you this, there’s a very small segment of the community and unfortunately a significant representation of county government–elected leaders–who were trying to propel that narrative,” he said. “But the overwhelming majority of the public trusts the sheriff’s department and, as you can see, we complete an investigation and we report on the results. We don’t piecemeal it. And we don’t cut any corners.”

That upbraiding was swiftly and repeatedly criticized online.

The LA County Sheriff’s Department is still blocking the release of Andre Guardado’s autopsy. His family had to commission their own, which shows officers shot him in the back 5 times: https://t.co/kU2X0przfB https://t.co/dr54qAmyc6

Instead of sympathizing w/ the family (who’ve lost a loved one via a hanging)- The Sheriff’s Office uses the opportunity to attempt to score political points and chastise folks he feels didn’t trust/agree with him. Shame. https://t.co/OvL1hSO0eC

They did everything wrong. Lied and said there weren’t cameras in the area. And then they never checked those same cameras. They mishandled it from the beginning. I see no evidence to support their conclusion, or that this “demonstrates why the public needs to trust the sheriff” https://t.co/gsDlZOlgmf

“As you can see by the information provided, it speaks for itself, the nature of the investigation,” Villanueva continued. “Every single investigation that our homicide bureau does–they do it–they’re committed professionals, they’re dedicated and the process is not–it doesn’t happen overnight.”

The sheriff also incited ire for appearing to brush off the difficulty of the Fuller investigation [emphasis added]:

You can tell that’s [sic] very complex investigations. And the more moving parts it is, the more complex the investigation becomes and it takes that much longer to do. This one, again, it took almost a month, and this is one of the more easier ones. So, the point is: people, they should not translate lack of information with a conspiracy. Or try to settle that. Because they are just pursuing their own political agendas and they’re not interested in allaying fears of the community.

James Queally, a crime reporter for the Los Angeles Times said: “I don’t know anymore about this investigation than most of you, but the Sheriff using a press conference about a suicide that some feared was a lynching to try and boost his agency’s credibility is … something.”