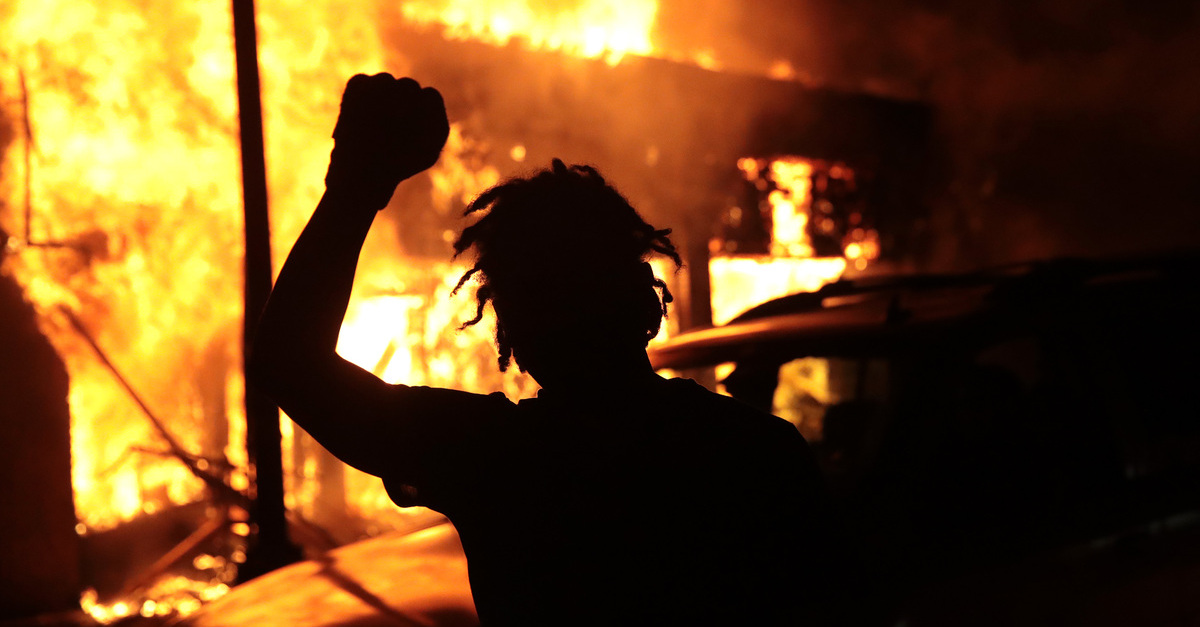 “We dreamed of utopia but woke up screaming,” read a piece of insurrectionist graffiti on a boarded-up Minneapolis storefront as fires and anger raged over the police killing of George Floyd.

The phrase is redolent of those used during the May 1968 uprisings in Paris that nearly toppled France’s government at the time. But American authorities insist the rebellion in Minneapolis and St. Paul is almost entirely the work of so-called “outside agitators.”

Arrest records suggest those claims may be false.

“I think our best estimate of what we heard are about 20 percent are Minnesotans, and 80 percent are outside,” Walz said during press conference on Saturday morning.

“I want to be very, very clear: The people that are doing this are not Minneapolis residents,” Frey insisted with certainty. “They are coming in largely from outside of the city, from outside of the region, to prey on everything we have built over the last several decades.”

“Because we had a relative stillness in St. Paul, we didn’t make an enormous number of arrests, but every single person we arrested last night, I’m told, was from out of state,” Carter said in a speech that was almost instantly repeated breathlessly across the internet and airwaves. “What we are seeing right now is a group of people who are not from here.”

Walz and Frey have not provided any evidence for their claims — which were largely repeated as gospel by many media outlets and politicians immediately after they were made. The two have also not indicated how they arrived at their conclusions and no such information is presently forthcoming.

BREAKING: Mayor of St. Paul Minnesota says he was wrong this morning when he said “Every single person” arrested last night in St. Paul was from out of town. He blames inaccurate information given to him during a police briefing.

The bipartisan officials’ claims were quickly scrutinized in some quarters:

Police claims of
‘outside agitators’ is one of the oldest PR tactics in the book and one
should be careful spreading it uncritically. The addition of white
supremacists is a new twist to peel off fence-sitting liberals but the
goal is the same: to delegitimize social unrest pic.twitter.com/SMrkaxSy6o

The available data, at least as of now, does not bear those official allegations out.

Rather, Hennepin County, Minn. arrest records from Thursday, May 28 through Saturday, May 30 tell a different story.

Minneapolis/St. Paul investigative reporters Brandon Stahl, A.J. Lagoe, and Steve Eckert, all of whom are with the local NBC affiliate, KARE-TV, first surveyed those records and came to the conclusion that authorities had overstated the numbers and have perhaps overplayed their hand. Law&Crime reviewed many, but not all of those same arrest records, and those reviewed by Law&Crime indicate the underlying reporting is accurate.

KARE 11 found that of 36 cases, about 86 percent of those arrested listed Minnesota as their address.

The data, taken from the Hennepin County Jail’s roster, shows that nearly all of the people arrested in likely connection to the riots live in Minneapolis or the metro area. The five cases from outside Minnesota were of people listed as living in Missouri, Florida, Arkansas, Michigan and Illinois.

The overwhelming majority of those counted as “received by jail” per those public records have listed addresses in Minnesota.

Some of the officials suggested approximately 80% of protesters were from out of state without directly referencing the numbers of people arrested.  While it is statistically possible that 80% of the arrests came from the pool of 20% of local citizens present, such claims seem dubious at first blush.

The phrase “outside agitators” has a long and odious history in social movement discourse and government efforts to frustrate and dismiss protesters and their demands. Author Corey Pein noted several such instances in a lengthy thread on Twitter.