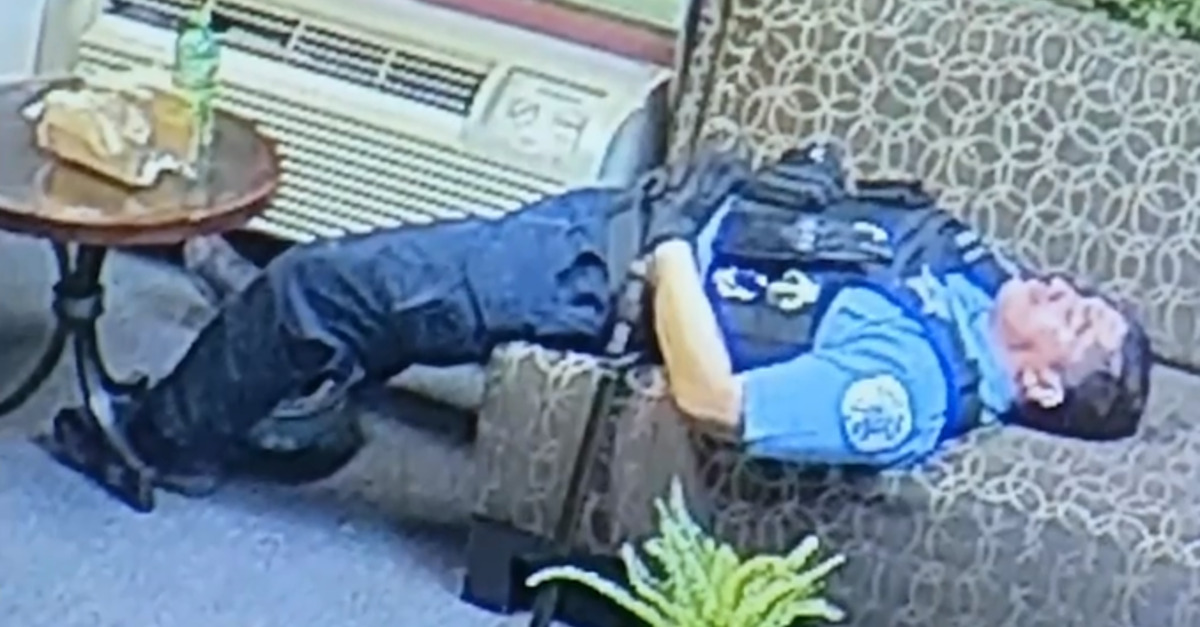 At least eight members of the Chicago Police Department were caught on video inside a black congressman’s campaign office lounging around, sleeping and even eating the congressman’s food while looting raged in a nearby shopping center.

“One was asleep on my couch in my campaign office,” Rush said.

The incident occurred on June 1 amidst widespread anti-police brutality protests and riots that devolved into looting in many areas across the Windy City. At one point, reportedly 13 or so officers had taken up resting/napping positions in Rush’s closed office.

“They even had the unmitigated gall to go and make coffee for themselves and to pop popcorn, my popcorn, in my microwave while looters were tearing apart businesses within their sight and within their reach,” the former Black Panther leader said.

“Clearly, I believe that they tarnished the badge,” Lightfoot said at the press conference. “Looting was going on, buildings were being burned, officers were on the front lines truly taking a beating … and these guys were lounging in a congressman’s office.”

The congressman’s staff noted that the officers themselves did not break the glass that opened the office.

Rush has been a vocal and plain-spoken critic of police brutality throughout his career–recently speaking out amidst the national narrative that resulted from the Minneapolis Police Department killing of George Floyd, the representative compared modern-day cops to those who beat Civil Rights protesters during the 1960s.

“The police department is probably more vicious now than even in the ‘60s,” the Chicago-based congressman recently told Vice News. “There’s more of an institutional protection: The FOP, the Fraternal Order of Police, and other organized reactionary right-wing structures protecting the police departments.”

According to the Chicago Tribune, the images shown during Thursday’s press conference were captured by a security camera.

The congressman said he originally received a phone call that his office on the corner of 54th Street and South Wentworth Avenue–roughly three blocks away from a police station–was being burglarized. Instead, the video showed eight or more officers, including three supervisors, sitting around, eating, drinking and generally relaxing with their feet up on his desks, Rush said.

The mayor, who ran as a moderate two years ago and was sharply opposed by Rush at the time, said she would use the opportunity to push for drastic police reform measures.

“These individuals abandoned their responsibilities,” Lightfoot added. “We should all be disgusted.”

Stopping short of calling for the officers to be fired, the mayor added that the Cook County State’s Attorney’s and U.S. Attorney’s offices were “scrutiniz[ing]” whether a crime was committed.

After one local news reporter tweeted about the incident, there was some confusion as to how and why the officers were in Rush’s office in the first place: Was it a police break-in or was it a response to an alarm of a burglary.

WTTW’s Heather Cherone said it was the latter.

The latter. The cops were called to the office AFTER it was burglarized.

But even still, under Illinois law someone commits a burglary “when without authority he or she knowingly enters or without authority remains within a building, housetrailer, watercraft, aircraft, motor vehicle, railroad car, or any part thereof, with intent to commit therein a felony or theft.”

Allegedly eating the congressman’s food while remaining in the building could qualify as burglary under the statute. Rush said that the officers “violat[ed] my personal space while looting was occurring all around them.”

“These individuals did, indeed, abandon their responsibilities and their obligation and their oath to serve and protect. We should all be disgusted, and we should all feel hurt and betrayed in this moment of all moments.”

[image via City of Chicago]