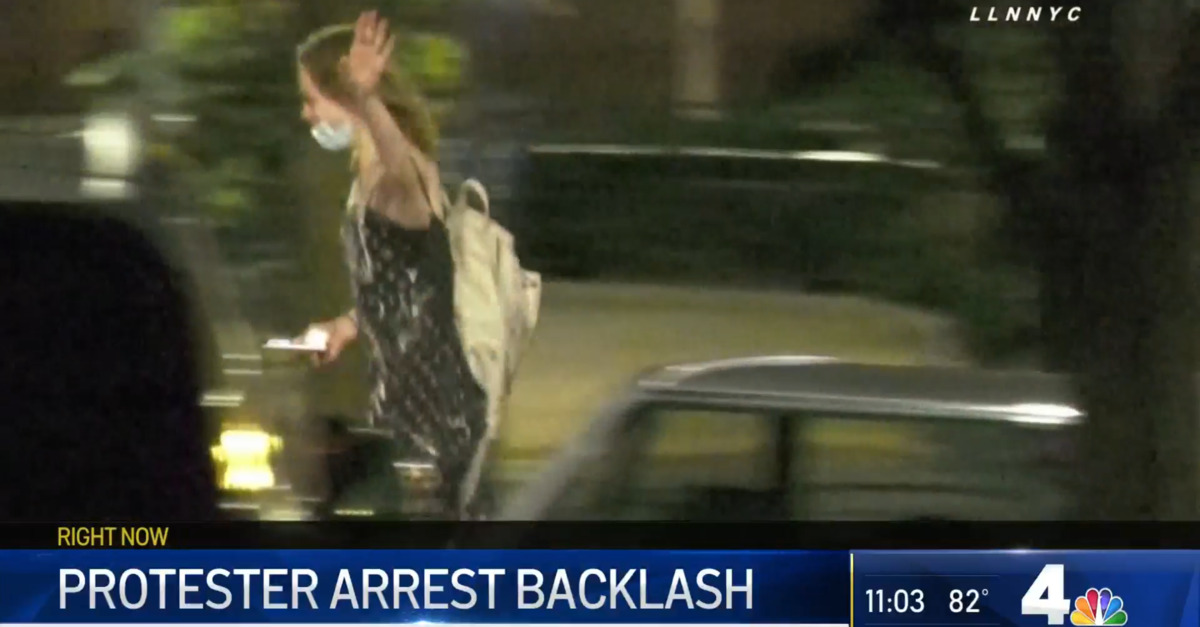 A group of men wearing shorts and tee shirts jumped out of an unmarked van in Lower Manhattan on Tuesday evening and grabbed a young woman off the street. Some of the men forcibly repelled and shouted at people attempting to intervene in the frenetic detention–apparently believing a kidnapping was taking place–while other men worked quickly to shove the woman inside the anonymous, waiting vehicle.

The men were plainclothes officers with the New York City Police Department (NYPD). Their actions, redolent of recent federal police actions in Portland, Oregon, have struck a tender chord. Now, the American Civil Liberties Union (ACLU) is demanding an end to the practice and punishment for those involved.

“We’re receiving reports that at least one protester was abducted off the streets today by unmarked ‘officers’ — this time in New York City,” the ACLU said on Tuesday night.

“These dangerous, abusive, and indefensible actions must stop,” the organization continued via Twitter in a post containing video of the encounter which has since been viewed millions of times. “Law enforcement must be held accountable.”

The New York Civil Liberties Union (NYCLU), the New York State branch of the ACLU, reacted to the shocking incident as well.

“Last night’s video of the NYPD snatching a protester and forcing her into an unmarked van is horrifying,” the NYCLU told Law&Crime in a statement. “These are the actions of a police force that think they can act with impunity.”

NYC is taking after Portland – a trans femme protestor was pulled into an unmarked van at the Abolition Park protest – this was at 2nd Ave and 25th Street pic.twitter.com/1PDhSYuK9h

The woman, Nikki Stone, has been a fixture at Black Lives Matter protests in New York City for a while. Currently without a home, Stone recently began staying with fellow travelers at an occupied encampment near City Hall that’s been dubbed “Abolition Park” (with reference to movements to defund and abolish the police).

“I have never been so fucking full and felt so healthy and felt so supported,” Stone recently told Gothamist. “Anywhere I go outside of here I’m a fucking freak, being trans and skateboarding and wearing different clothes. I’ve had transphobic slurs thrown at me for being in public. But here the first thing I get asked is, ‘What are your pronouns?’”

On Tuesday, while part of a march back toward Abolition Park, Stone was forcibly grabbed. Fellow protesters, at first unclear about the circumstances of her would-be abduction, attempted to save their friend. A swarm of uniformed NYPD bicycle cops arrived soon thereafter and barricaded the area.

“In regard to a video on social media that took place at 2 Ave & 25 St, a woman taken into custody in an unmarked van was wanted for damaging police cameras during [five] separate criminal incidents in and] around City Hall Park,” the NYPD alleged.

Their statement also alleged that the arresting Warrant Squad officers “were assaulted with rocks and bottles,” but the video does not appear to support this claim.

The NYPD has maintained that using officers in the controversial manner seen on the video is customary–but the department told the city’s elected leadership that plainclothes operations were a thing of the past nearly two months ago.

Outrage over the incident has swiftly increased–even causing several members of the New York City Council who recently voted against budget cuts for the NYPD to claim they were concerned and disturbed by Stone’s arrest.

“Last night, plainclothes NYPD officers yanked a young transgender woman, Nikki, off the street in broad daylight,” his statement read. “This incident, along with many others of unidentified officers arresting people and taking them away in unmarked vehicles, is part of a frightening pattern being perpetrated across this country. We know that people of color and transgender people are at greater risk of police brutality, with transgender people at particular risk of harassment and abuse while detained.”

Stone was given a desk appearance ticket for the minor crimes she is alleged to have committed and was released early Wednesday morning.

A GoFundMe was later set up by a fellow protester to help with her “recovery and any legal fees.”

“We’re relieved to hear about Nikki Stone’s release early this morning,” the NYCLU continued, “but this never should have happened in the first place.”