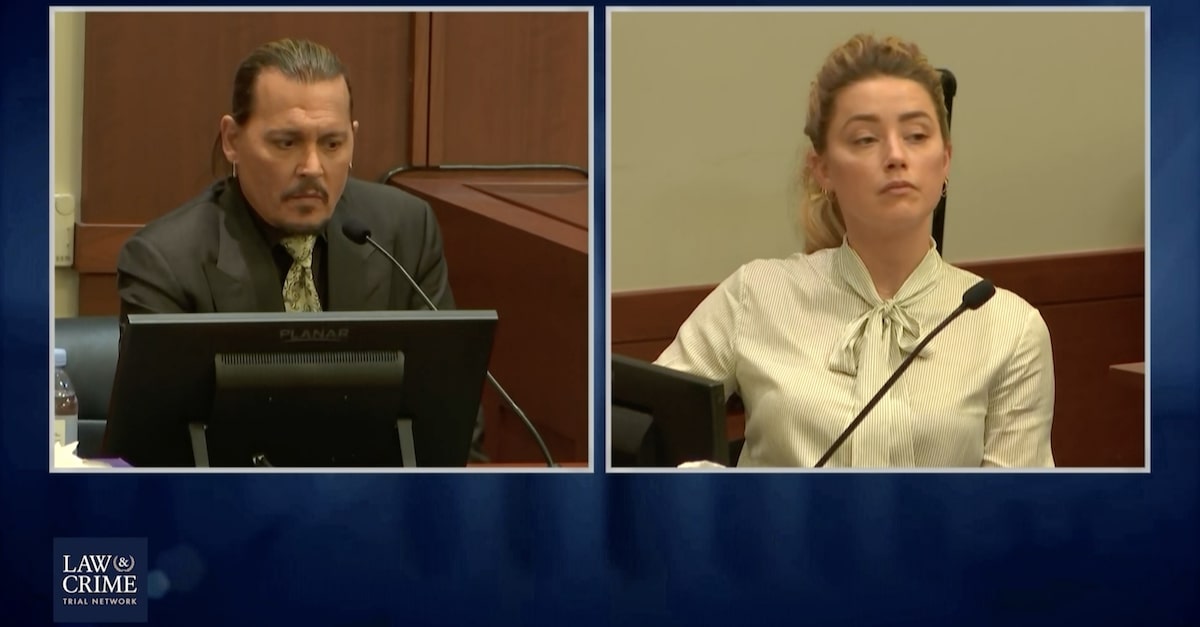 Johnny Depp testifies during his case against Amber Heard, pictured on the right.

Before Johnny Depp ever took the stand, jurors have heard accounts of the Hollywood star’s binge drinking and substance abuse. Attorneys for his ex-wife Amber Heard accused him of flying into a drug-induced rage fueled by up to 10 tablets of ecstasy over a three-day bender ending in an alleged sexual assault.

Depp fiercely denied such accounts on Tuesday as a cheap shot from someone exploiting his vulnerabilities for personal gain.

“It’s never been for the party effect,” insisted Depp, referring to his drug use. “It’s been for trying to numb the things inside that plague someone who’s experienced trauma.”

Earlier in his testimony, Depp spoke about his difficult upbringing with a mother whom he said physically and emotionally abused everyone else in the household. Depp’s sister Christi Dembrowski delivered similar testimony, and his lawyers depicted that difficult upbringing as a prelude to a learned behavior that would repeat with Heard. The $50 million defamation trial is over Heard’s allegations that Depp physically and sexually abused her, claims tacitly alluded to in her 2018 Washington Post op-ed. But Depp claims the roles were actually reversed.

“The characterization of quote-unquote ‘substance abuse’ that’s been delivered by Ms. Heard is grossly embellished and I’m sorry to say but a lot of it is—it’s just plainly false,” Depp asserted. “I think that it was an easy target for her to hit because once you’ve trusted somebody for a certain amount of years, and you’ve told them all the secrets of your life that information and of course can be used against you.”

Depp did, however, acknowledge struggles with opiates, particularly a form known as “Roxies.”

“I remember that because when I was with Ms. Heard and her friends and we were all drinking wine and I was smoking marijuana, they would they used to tease me because of what they sort of said was a ludicrous tolerance,” Depp said.

“I was working on ‘Pirates [of the Caribbean],’ and there was a scene in which I had to grab this large gold-and-red, you know, stately gilt chair, pick it up, and throw it, chuck it out this big giant window,” Depp continued. “And so I did it, and as I swung around to throw the chair out the window, I felt this immediate electricity from the bottom of my spine down my left leg, and it was like an electricity that burned. So I had obviously […] pinched something, done something.”

Seeing a chiropractor to “no avail,” Depp said: “Then, I saw a doctor, and the only pain medication that she recommended and prescribed to me was Roxycodone. And there was a part of me that was a little bit worried. I know I witnessed friends and people over the years who’ve had problems with heroin, you know, and I didn’t want to get bit by that snake. And I started taking the Roxies, and I was bit by the snake. And then, before you know it, that monkey is on your back to stay.”

Speaking of his artistic influences during his testimony, Depp delved into his friendship with gonzo journalist Hunter S. Thompson, a countercultural icon whose Fear and Loathing in Las Vegas is known for its depictions of drug use in the 1960s. Depp starred in its film dramatization.

When he saw Heard at the audition, Depp said: “I took one look at her and said, ‘Yes, that’s who Hunter wants. That’s the one. She could kill me, so that’s the one.'”

Depp’s romance with Heard brewed on set, even as the actress was two decades his junior and in a relationship with someone else.

“I was taking a shower, and then she comes into the room,” he recalled. “And she walks, opens the shower, and we kiss. […] It felt like something that I shouldn’t be feeling because she had her wife, and even though it was a scene. And she had a wife.”

Beyond Hunter Thompson, Depp cited as his influences a host of other literary, musical and film influences who cut against the grain of the dominant cultures of their times, like poet Allen Ginsberg, singer-songwriter Van Morrison and director Stanley Kubrick’s A Clockwork Orange.

Depp’s foray on the witness stand about arts and letters came in response to a question about lurid texts seen by the jury about Heard, including one seeming to fantasize about raping her corpse to make sure she is dead. Without addressing any one, Depp depicted the missives as the product of the life of the artistic mind.

“I am ashamed of some of the references made,” Depp said, describing them as the result of the “heat of the moment” that led his imagination to go into “dark places.”

In an interview, legal expert Mitchell Epner described that concession as part of a strategy by lawyers known by the acronym “BOBS,” short for “bring out the bad stuff.”

“Depp spent a long time on drug use, with a rambling narrative that claimed it was ‘self-medication,’ never to ‘party,'” noted Epner, a partner at Rottenberg Lipman Rich, PC. “In the text messages, Depp acknowledged that they were ugly—at a high level of generality and tried to blame them on being an author who does not self-censor what he writes. He did not deal with any specific text. If they do not deal with specific texts before cross-examination, the cross may be devastating. Since the whole case boils down to his credibility against hers, this seems to be an unnecessary gamble.”

Heard is countersuing Depp for his lawyer describing her allegations as a “hoax.” Her attorneys are expected to cross-examine him on Wednesday.