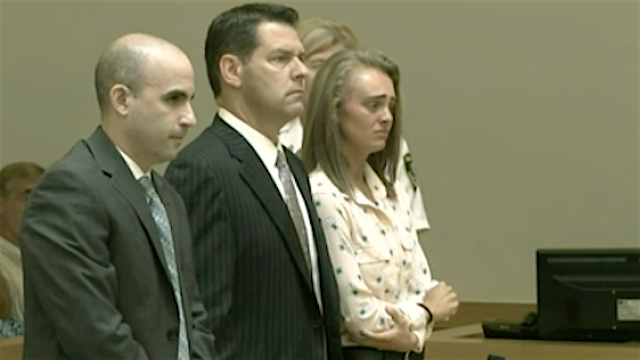 Michelle Carter, the Massachusetts woman convicted in June of involuntary manslaughter for telling her boyfriend to continue on with a suicide attempt when they were both teen high school students, will be sentenced Thursday.

She faces one of several possible paths.

First, it’s possible Carter could be committed to prison for the full possible adult sentence. For involuntary manslaughter, the possible maximum penalty for Carter is no more than 20 years in prison. She could also face a $1,000 fine coupled with a sentence of not more than two-and-a-half years in prison. If Carter is ordered to a prison under this first possible option, she could be ordered to adult confinement. She’s over the 18-year limit under the sentencing statute for imprisonment “in a youthful offender unit separate from the general population of adult prisoners.”

Second, it’s possible Carter could be sentenced to a “combination sentence.” She could be committed to the department of youth services until she’s 21 years old (Carter is currently 20). After that, she would receive an adult sentence — in theory. It would be suspended pending a successful probation period.

Third, it’s possible Carter could be committed to the department of youth services until she’s 21.

The options before Juvenile Court Judge Lawrence Moniz, who presided over the trial, are therefore rather broad.

It’s important to note, however, that the overarching principle of youthful offender law is that parties brought before the court “shall be treated, not as criminals, but as children in need of aid, encouragement and guidance.”

That guidance is something the judge will have to take into account.

The judge will also have to consider sentencing recommendations. The recommendations must protect both “the present and long-term public safety.” Here are factors the court must consider:

Live coverage of the sentencing begins at 1:30 p.m. EST on the LawNewz Network. The hearing itself is scheduled to stream at 2 p.m. EST. Watch below: