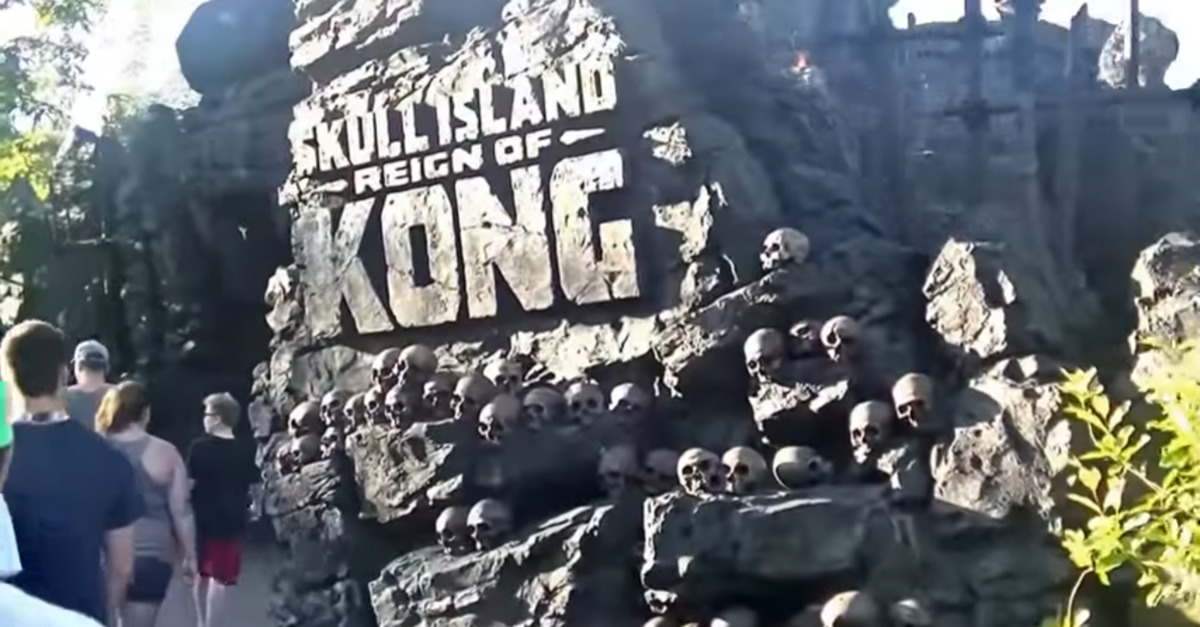 A lawsuit filed by a Guatemalan family against a popular theme park in Florida argues that warning signs must disclose potential dangers in languages other than English, according to a complaint obtained by Law&Crime.

Jose Calderón Arana was 38-years-old when he suffered a fatal heart attack during the “Skull Island: Reign of Kong” ride at Universal Orlando Resort on December 10, 2016. The ride uses a mixture of animatronics and 3-D technology to simulate a truck expedition through a jungle island filled with animals–in a sort of pastiche nod to more recent versions of the “King Kong” movie series.

Posted at the ride’s entrance is the following warning:

Warning! This ride is an expedition through the rough terrain of King Kong’s natural habitat. The movement of the truck is dynamic with sudden accelerations, dramatic tilting and jarring actions.

That message continues on to ward off pregnant women as well as people with heart, back, neck, or blood pressure issues. Many of the English-only warnings are repeated throughout the line as would-be riders await their turn and some of those warnings are also accompanied by visual representations, according to the Orlando Sentinel. The picture illustrating heart problems shows a figure clutching their hand to their chest.

There is also an audio recording that repeats most of the information–but again, only in English.

“This is a safety advisory,” says a voice advising those with heart conditions to avoid the ride. “Riders should expect sudden and extreme movement.”

The young father had a history of heart problems but didn’t speak or read English, however, so none of the multiple warnings in various media were of any use to him, the family’s lawsuit claims. After the ride, he told his family that he didn’t feel well and sat down to rest on a bench, according to the lawsuit. His wife thought it was just an upset stomach possibly caused by fast food.

When she and their 8-year-old son returned from another ride a short while later, Calderón Arana was laying on the pavement, surrounded by Universal Orlandoo Resort staff. He was taken to a nearby hospital and pronounced dead from a heart attack, multivessel coronary disease, and cardiogenic shock, according to a death certificate accompanying the lawsuit–just three weeks shy of his 39th birthday.

The lawsuit claims that Universal is at least partly to blame, because of the lack of Spanish language warnings and because Universal delayed helping Calderón Arana as he lay dying.

“Universal was aware of the great number of tourists on their premises who do not speak English,” the filing from earlier this month notes.

Lou Pendas, the family’s attorney, told the Sentinel that Universal should post warnings in Spanish, French, and other major international languages. He said:

The issue centers around had he been given the opportunity to fully assess his risk — there were no signs of any kind warning of the potential dangers in a language he was comfortable in understanding. He sees kids going in there; he sees elderly people going in there. He’s going, “OK, I can handle this.”

Pendas also hopes to get details about what happened on the day Calderón Arana died through the discovery process.

“I don’t know how [his family] will ever move beyond this,” he said.

The wrongful death lawsuit is seeking in excess of $15,000 in damages.

Law&Crime reached out to Universal Orlando Resort for comment on this story but no response was forthcoming at the time of publication.

Arana v. Universal by on Scribd

Editor’s note: this story has been amended post-publication to include the full lawsuit.