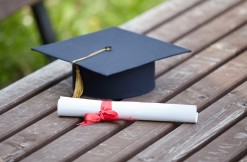 Anna Alaburda graduated from the Thomas Jefferson School of Law in 2008. She has never had a full-time job as a lawyer, despite passing the bar and getting good grades. Now she’s suing her alma mater, which allegedly inflated its alumni employment data. Does the school lie about how well graduates are doing? Alaburda, 37, says yes, and will try to prove it in a trial scheduled to begin Monday in California.

TJSL allegedly buffed employment data using non-lawyer jobs, creating a false expectation that alumni will more easily get work as attorneys and the like. One former school employee, who’ll testify for the plaintiff, is expected to say she was encouraged to tweak the data.

It’s a scam that leads students to crippling debt, Alaburda will claim in court. As of early March, she had a student debt of $170,000 with 8 percent interest, though she originally paid $150,000 for the degree. That’s too much for her since she’s only been doing part-time work since 2008.

The school’s employment reports are fake, said her attorney, Brian A. Procel, to The New York Times. See TJSL’s 2011 numbers: 92.1 percent of grads were working full-time, even though legal hiring generally fell that same year, Procel said. Compare that to 2006 and 2007, when legal hiring was better but the school only claimed an 83 percent rate.

But TJSL’s lawyers are expected to say Alaburda’s problems are her own fault—she’d turned down a job with a law firm shortly after graduation. In court papers, she claimed the job, which paid $60,000, “was letter favorable than non-law-related jobs that were available.” And that offer only came after she applied to 150 different law jobs.

Of course, the school also claims its numbers are accurate.

Alaburda’s suit isn’t the only one of its kind, but definitely the most successful. A New York State judge dismissed a similar suit in March 2012: grads of New York Law School claimed their alma mater fudged postgraduate employment data.

“It is also difficult to conceive that somehow lost on these plaintiffs is the fact that a number of law school graduates toil—perhaps part-time—in drudgery or have less than hugely successful careers,” said Justice Melvin L. Schweitzer. In other words, buyer beware, even when it comes to school. Judges ruling on similar cases in Michigan and Illinois made the same reasoning.

There have been 15 similar lawsuits filed in the last several years, according to the Times. Only two remain active. Alaburda’s claim, and another one in Federal District Court. The latter complaint alleges that Widener University School of Law in Delaware buffed employment data with “any kind of job, no matter how unrelated to law.” A judge recently shot down the plaintiff’s request for class-action status, but that decision is getting appealed.