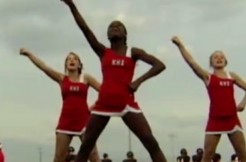 Teenage cheerleaders can sue again to display Bible-themed banners, after the Texas Supreme Court reinstated their lawsuit Friday. This case exists in a constitutional gray area. After all, it’s about how far schools can go to control students’ First Amendment rights—not in the name of hindering speech, but in the name of separating church and state.

This case features a few moving parts, so let’s start the beginning. High school cheerleaders from Kountze, Texas ran afoul of school authorities in 2012. Their infraction: They’d been displaying Bible-themed banners at football games. The cheerleaders had made it themselves with their own materials. Nonetheless, the school district had a ban in place. No religious messages at school-sponsored events.

The Kountze Independent School District had put the ban in place, rather than face a threatened lawsuit from the Freedom From Religion Foundation, according to the Texas Tribune. The FFRF’s reasoning for the would-be suit: Religious messages at school-sponsored events violated the First Amendment’s separation of church and state.

Until the ban, the cheerleaders would display signs with Bible quotes. Passages, cited in court documents, like “I can do all things through Christ who strengthens me,” and “But thanks be to God which gives us victory through our Lord Jesus Christ.”

But avoiding one lawsuit just landed the school district in another one. Parents from the spurned cheerleaders sued, saying their daughters’ speech was being squelched. No, the parents essentially argued, the school itself wasn’t displaying religious messages. It was the girls, as individuals, who provided their own materials, and made the banners themselves.

So one thing led to two possible lawsuits. Do you see why this story had a few moving parts?

The school district overturned their ban in 2013, but the parents kept suing away. The case bounced around the legal system for a bit, with a state judge ruling for the cheerleaders that same year, according to the ABA Journal. Soon that didn’t seem to matter, though. The 9th Texas Court of Appeals dismissed the case, according to the Texas Tribune. After all, the ban didn’t exist anymore. The lawsuit was apparently irrelevant now.

But last week, the Texas Supreme Court disagreed. They voted unanimously to reinstate the suit, and remand it back to the court of appeals.

“The District no longer prohibits the cheerleaders from displaying religious signs or messages on banners at school-sponsored events,” Justice John P. Devine wrote in the opinion. “But that change hardly makes ‘absolutely clear’ that the District will not reverse itself after this litigation is concluded, without the cheerleaders’ requested declaratory and injunctive relief.”

To be clear, the ruling was just about “mootness,” so to speak. Whether or not the suit was relevant anymore. Justices couldn’t rule on the case’s gray area, that tension within the First Amendment between freedom of speech, and separation of church and state.

But they certainly let their opinions be known. A concurring opinion from Justice Eva Guzman complained about this tension, which can be high in school settings where authorities prohibit displays of religious belief.

“Confusion exists about the extent to which restraints on religious expression are permissible,” she wrote. In other words, she says school authorities have no idea how to best balance First Amendment issues.

She went onto write that, “The need for further guidance is exemplified by cases in which perplexed school officials have switched sides multiple times, sometimes allowing and other times disallowing the contested speech. This case presents yet another example of vacillating policy without genuine resolution of the underlying dispute.”

In any case, this lawsuit is live again, and will be ruled on by the 9th Texas Court of Appeals.