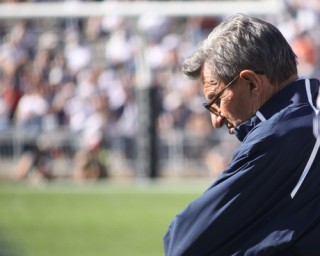 For most of the past five years I have somehow found myself in the bizarre position of, despite having no connection at all to Penn State, having investigated the entire Jerry Sandusky case in greater depth than anyone else on the planet.

I have made a documentary film defending Joe Paterno against what I strongly perceived as a crazed rush to judgment and written two online “books” about how my view of the case has evolved as I learned more about it than any person should ever have to endure (especially without getting paid). I have done two major Today Show interviews with Matt Lauer on the case, and I have even been arrested for simply attending a related event where I had a ticket in my own name.

So you might imagine my shock and sadness when I learned from the news media late last week that presumably all of my incredibly hard work had been completely wasted. After all, we now “know” that Joe Paterno not only covered up for Jerry Sandusky’s crimes, but he did so for far longer (since 1976?!, 1971?!) than anyone ever had thought even possible. We “know” this because every single major media outlet told us so; many without even using the word “allegedly” in their headlines.

Of course, all know that if everyone in the news media is saying the same thing, then it can not possibly be wrong. Surely to make such a damning accusation against a man, especially one who is dead and can’t even defend himself, the evidence of this must be overwhelming!

At the very least, someone must have written a book about this for a major publisher and had done a live interview with “Good Morning America” in order to make their extremely old claim be perceived by the media as so instantly credible.

Well, hardly. In fact, the reporting on this “story” is so embarrassingly bad it makes the media’s pathetic “We found OJ Simpson’s knife!” obsession from earlier this year seem like it is deserving of journalism awards.

Penn State has paid out almost $100 million to the alleged victims of Jerry Sandusky. This is a process which has been shrouded in secrecy. There are no public records of any of the investigation or vetting which may (or, more likely, given the circumstances as I know them) or may not been done with the individual claims.

The insurance company which covered Penn State went to court to fight their obligation to reimburse the university for the money they paid out in settlements. As a part of that process, apparently the judge presiding over the case was told by the insurance company of several allegations made by the accusers which they thought bolstered their case that Penn State had forfeited its right to be covered.

In his ruling opinion, the judge then made a passing, less than one sentence, mention of one of the accusers having claimed, at least thirty-six years after the fact, that he told Joe Paterno as a young person in 1976 that Jerry Sandusky sexually abused him.

That’s it. No name was given. No details of the story or even a quote from a deposition or interview. No corroborating evidence. No explanation why this story had never been told to anyone else, including the many agencies investigating the case, even after it became a massive news story.

In short, there was no reason at all to believe this claim, except that it apparently came from a “Sandusky accuser,” which, in the collective mind of the news media, means that the accusation might as well have been found on a stone tablet on the top of a mountain where it was located on the site of a lighting strike.

Now, in a normal case, this might at least be called a “good lead” and would result in an actual investigation of the claim to determine its level of credibility before ever being reported. However, as I know better than anyone, this is not a remotely “normal” case.

In this case however, any such allegation should be automatically viewed with extreme skepticism (the opposite of how all allegations in this case have been seen) because of the massive amounts of money which are at stake. Sandusky accusers have been paid, with no civil trial, on average about three million dollars for apparently nothing more than a statement (with no cross examination) of their abuse and an agreement to not pursue any further legal claims.

I have intimate knowledge of the Sandusky settlement process which I am not a liberty to divulge at this time. However, I can say with great certitude that the bar for getting approved was extremely low and rather specific. Two of the primary elements they required were a direct connection to Penn State and to Sandusky’s charity, The Second Mile.

Here is where the 1976 allegation of Paterno’s knowledge begins to break down before it even gets out of the starting gate. You see The Second Mile wasn’t formed until 1977. This means that the accuser in this situation had two huge hurdles preventing him from getting a settlement. His age (by 2011 which is the earliest he could have possibly come forward) put him way outside the statute of limitations, and he had no possible connection to the charity.

This would have meant that Penn State could have easily dismissed his claim as not being eligible, unless he had some sort of “special circumstance,” such as an extreme connection to Penn State (ideally with something the news media would want to report on should a settlement be rejected). Well, this is how, in a logical world, the story of him having told Joe Paterno of his abuse in 1976 was born.

In my highly educated opinion, this accuser, faced with being shut out and under guidance from an attorney who knew the lay of the land, suddenly decided to play the “Paterno Card” in a “Hail Mary” attempt to save a claim which was may have very well been bogus (there is no evidence that either the Attorney General’s or Louis Freeh’s office were ever told of this “bombshell” allegation, and there absolutely would be if that had happened).

It appears that, in this case, Penn State, which has had a bizarre and greatly misunderstood disincentive to defend itself and its employees from the beginning of this fiasco, allowed that desperation pass to be completed without even token opposition.

I am convinced that this is what had to have happened not just because it is a scenario which is perfectly logically and completely consistent with the rest of the facts of this case. I am also quite confident that this series of events explains the truth because the alternative explanation (the one bought instantly by the news media without even a cursory thought) is totally ludicrous.

Even if you presume Sandusky was a monster and a criminal mastermind (having interviewed him for hours on multiple occasions while in prison, I strongly suspect he is neither) and Paterno was a complete fraud who cared far more about football than the safety of kids, the 1976 story is completely nonsensical.

We are being asked to believe that in 1976, a boy somehow has the ability and courage to come up to Joe Paterno (but never speak about this publicly for forty years, even as a middle-aged adult when the story becomes an international sensation) and tell him that his assistant coach sexually abused him. Paterno then, despite the fact that Sandusky is at that time an unknown and low-level assistant coach, not only doesn’t go to the police or the kid’s parents, but he doesn’t even fire Sandusky?!

Even more ridiculous, Paterno promotes Sandusky to defensive coordinator the very next year in 1977?! Topping off the insanity, Paterno also allows Sandusky to then start a charity for at risk kids, an organization which will have close ties for the next thirty-four years to the university and football program to which Paterno devoted his entire life?!

In a remotely fair media world the (decidedly “unviral”) headline for this story should have been, “Absurd Allegations Against Paterno Raise Questions About Accuser Credibility.”

This entire scenario is not only ridiculous in a vacuum, but it also contradictory to nearly everything we previously knew about the case (from actual testimony under oath, documentation, and that sort of stuff).

If this 1976 story is somehow true, then why would Paterno suddenly “fire” (he didn’t) a much more influential and famous Sandusky as the media likes to pretend happened in 1999 after Sandusky was exonerated in a 1998 DA investigation? And if Paterno “knew” all along, why was he supposedly so hesitant to come down on Sandusky in 2001 after he was no longer even part of the football program and they were famously not friendly (please don’t give me the avoidance of “negative publicity” nonsense as numerous other situations, including the Dennis Hastert scandal, have shown that no one would have cared very much had a former coach been found to be such a criminal)? And why did Paterno suddenly become the prosecution’s star witness ten years later when the Mike McQueary episode finally made it to a grand jury?

It all simply makes no sense, while the alternative scenario I outlined previously fits with everything we know about human nature and the totality of the facts in this case.

Unfortunately, the modern news media now lacks the patience, expertise, or even interest to examine even the basic facts of a complex story, especially when a viral headline like “Joe Paterno Knew of Jerry Sandusky Abuse” can be so easily had with no accountability when it inevitably turns out to be balderdash (for the record, if the 1976 allegation is ever remotely proven I pledge to take down my website on the case and donate $10,000 to Matt Sandusky’s foundation for sex abuse victims).

Once these unvetted settlement allegations started to leak, the floodgates quickly open as the news media sensed the ability to reconfirm a narrative to which they had rushed but that had been falling apart in the last couple of years (it should be noted that the Penn State administrators charged with a cover up have still never faced trial and that most of the charges against them have been dropped).

CNN (through Sara Ganim, a reporter, whose entire career is completely invested in the current narrative) came out with a far more specific, but incredibly dubious, report on a man who claims that he told Paterno about abuse over the phone in 1971. Here are the giant problems with that story:

In any other case, I submit to you that such a set of facts would not have even passed the standard for being reported, just as CNN refrained from doing here until it was suddenly safe and “newsworthy” to do so. Unfortunately, Penn State’s totally bogus settlement process has been used by the media as a rubber stamp of “truth” on nonsensical allegations which were clearly rewarded with huge financial payouts.

Over the past five years, I have witnessed first-hand a staggering amount of misinformation reported about this entire situation, but this most recent example of “Media Malpractice” is among the worst I have ever witnessed in my entire career. It should greatly concern anyone in the media or legal professions with a conscience. It is also only the tip of the iceberg on the distortions and injustice in this case. Should you be interested in the amazing real truth, I urge you to get in touch with me.

John Ziegler is a documentary filmmaker and a nationally-syndicated radio talk show host. You can follow him on Twitter via @ZigManFreud