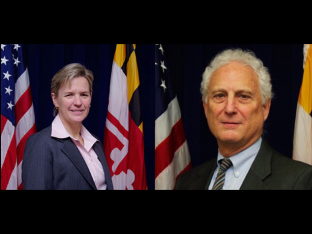 A law professor at George Washington University School of Law has filed two additional disciplinary complaints against Baltimore Deputy State’s Attorneys Michael Schatzow and Janice Bledsoe.  Schatzow and Bledsoe are the two courtroom prosecutors involved in the trials against the six Baltimore police officers charged in connection with the death of Freddie Gray.  Professor John Banzhaf filed the complaints on Tuesday with the Attorney Grievance Commission of Maryland.  Last month, Banzhaf also filed a disciplinary complaint against Baltimore State’s Attorney Marilyn Mosby that seeks to have her disbarred for alleged unethical conduct in the prosecution of the “Baltimore Six.”

The two new complaints allege that Schatzow and Bledsoe violated multiple provisions of the Maryland Lawyer’s Rules of Professional Conduct, including a failure to turn over exculpatory evidence and the failure to refrain from prosecuting charges not supported by probable cause.  Prof. Banzhaf’s complaints heavily rely in the findings of trial Judge Barry Williams.

The complaint states, “[The most recent] opinion, like the earlier two, is replete with findings that there was “no evidence” or that the prosecutors “failed to show” – not that the evidence was equivocal or weak or even flimsy, but rather completely nonexistent on many key points.”

Prof. Banzhaf argues these findings show “even if there initially once was probable cause to indict the officers, and likewise sufficient evidence to warrant a guilty verdict beyond a reasonable doubt, it has long since vanished, especially by the time a decision was made to proceed to trial with Lt. [Brian] Rice.”

In a statement released on Tuesday, Prof. Banzhaf said, “Should the prosecutors decide to bring the remaining officers to trial, they will simply continue committing professional suicide – as [Duke lacrosse prosecutor Mike] Nifong did.”

Prof. Banzhaf knows a lot about the Nifong case, too.  He played a role in the disbarment and civil litigation against Nifong.  In an interview last month with LawNewz.com, Prof. Banzhaf said he sees a lot of similarities in how Nifong conducted himself in the Duke lacrosse case to how the Baltimore prosecutors have conducted themselves in the Freddie Gray matter.

Of the six officers charged in the case, three have now been acquitted at bench trials and a third, William Porter, is currently awaiting retrial after jury was one vote short of acquitting him of involuntary manslaughter charge after a trial last year. The two other officers are still awaiting their original trials.